Art’s World covers a lot of things mostly of sexual nature, but this has to be one of the most unusual.

Yes, there is such a thing! The actual name is the Icelandic Phallological Museum  located in Reykjavík, Iceland. It contains the world’s largest display of penises and penile parts. The collection of 280 specimens from 93 species of animals includes 55 penises taken from whales, 36 from seals and 118 from land mammals, and trolls. 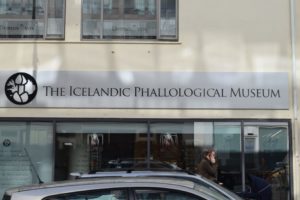 In July 2011, the museum obtained its first human penis, one of four promised by would-be donors. (No, John Holmes was not one of them!) Its detachment from the donor’s body did not go according to plan and it was reduced to a greyish-brown shriveled mass that was pickled in a jar of formalin. The museum continues to search for “a younger and a bigger and better one.”

Founded in 1997 by since-then retired teacher Sigurður Hjartarson and now run by his son, the museum grew out of an interest in penises that began during Sigurður’s childhood when he was given a cattle whip made from a bull’s penis. He obtained the organs of Icelandic animals from sources around the country, with acquisitions ranging from the 170 cm (67 in) front tip of a blue whale penis to the 2 mm (0.08 in) baculum of a hamster, which can only be seen with a magnifying glass. (Hmmm, sounds like someone I knew). The museum claims that its collection includes the penises of elves and trolls, though, as Icelandic folklore portrays such creatures as being invisible, they cannot be seen. The collection also features phallic art and crafts such as lampshades made from the scrotums of bulls. (Now wouldn’t you want one of those in your living room?) 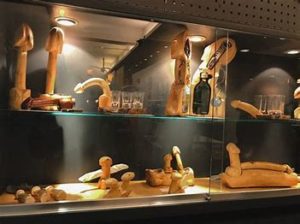 The museum has become a popular tourist attraction with thousands of visitors a year and has received international media attention, including a Canadian documentary film called The Final Member, which covers the museum’s quest to obtain a human penis. According to its mission statement, the museum aims to enable “individuals to undertake serious study into the field of phallology in an organized, scientific fashion.”

The collection was at first housed in Sigurður’s office at the college until he retired from his teaching job. He decided, more as a hobby than a job, to put it on public display in Reykjavík and was awarded a grant from the city council of ISK 200,000 to support the opening of a museum in August 1997. By 2003, it was attracting 5,200 visitors a year, of which 4,200 were from abroad. He put the museum up for sale in 2003, but also offered it to the city of Reykjavík as a gift. However, he was unsuccessful in obtaining financial support from the state or city. When he retired in 2004, he could no longer afford the rent on the museum’s premises. After his retirement, he moved along with his collection to Húsavík, a fishing village. 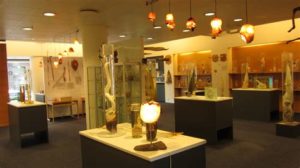 In 2012 he handed over the collection to his son, Hjörtur Gísli Sigurðsson described by Slate as “the world’s only hereditary penis-museum operator”. It was relocated back to Reykjavík’s main shopping street at Laugavegur 116. An offer from a wealthy German to buy the museum for ISK 30 million (US $232,000) and a proposal to move it to the United Kingdom were both turned down, as Hjörtur insists that “the museum has to be in Iceland.” He intends to continue acquiring new penises because you can “always get a better, newer one … a bigger size or better shape, you know?” So, if you know anyone?

There is a lot more to learn and read about this fascinating place and a lot of the history, medical and functions of various members. There is also a film, a documentary called “The Final Member” that is available. So, if you are planning on a vacation trip to Iceland (which is actually a beautiful country and really is warm in the summer) be sure to stop by the Icelandic Phallological Museum. I can just imagine what the souvenir shop is like. Wonder if they serve drinks so you get get a “stiff one”?

For more information about this museum go to their official site at:  http://phallus.is/en/