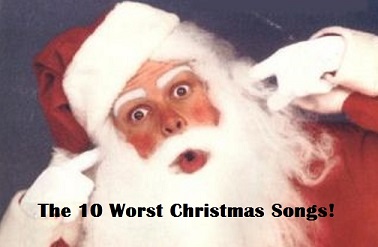 “The Chipmunk Song (Christmas Don’t Be Late),” Alvin and the Chipmunks – Okay, listen once just for the novelty and that’s it! Clever idea by David Seville, and they were a big success with other songs and an album, But once was more than enough.

“Dominick the Donkey”, Lou Monte – He had some success in the 50’s and 60’s with Italian novelty songs like “Pepino the Mouse” and “Lazy Mary”, but this take off on Rudolph is totally horrendous. My apologies to all the donkeys for this mess.

“I Saw Mommy Kissing Santa Claus” – Jimmy Boyd – Another of those hear it once and that’s enough”. Beyond that some stations won’t play it because straight laced prudes think the song is ‘obscene”. But that’s because they don’t get the joke in the lyrics.

“Santa Baby”, Michael Buble – I love Buble and his performances, but taking this long time favorite that Eartha Kitt turned in to a sexy hit, was the wrong idea. Changing the lyrics to fit a guy  with words like “pal”, “dude”  , “buddy” was just yuk. Sorry Michael big mistake here.

“I Want a Hippopotamus for Christmas,” Gayla Peevey –How this even made any list is a miracle. Gayla was a 10 year old back in 1953 when this was done. While she has a decent voice, the whole novelty is just ridiculous un less you have a huge house and is definitely a “worst” pick.

“Funky, Funky Xmas,” New Kids on the Block – Just because they were a big hit in the 80’s doesn’t mean doing a Christmas song is gold. This one sure wasn’t and it is so replete of the 80’s time frame, that is where it should stay. By the way what is a “funky” Christmas anyway?

“Do They Know It’s Christmas?,” Band Aid – The original intent, to help feed the people of Ethiopia back in 1984 during the famine, was a great idea. A super group of recording stars to do a Christmas themed song. Unfortunately one listen to it is more than enough as one of the worst ever.

“Christmas Tree” – Lady Gaga – This was released back when she was still doing the outrageous costumes, makeup and crazy songs. Unfortunately this “Christmas” song       was absolutely a major mistake. I am as open minded as they come but the sexual innuendos in this song are so obvious. Just terrible.

“All I Want for Christmas Is My Two Front Teeth”  – Spike Jones and His City Slickers – This novelty made it to #1 in 1948 and 1949.  It has been recorded by every music genre from Ray Stevens to the Platters to Nat “King” Cole. It was also done as a parody by RuPaul and the Three Stooges…..enough said!

“Grandma Got Run Over by a Reindeer,” Elmo & Patsy – You knew this one would make the list didn’t you? Okay the novelty at the time was cute, grandma getting tipsy on eggnog and then….bam! But given the climate in today’s world there is just no good place for it and especially this Christmas.

There you have my own personal list of the worst Christmas songs. I am sure many of you will agree oin these and have other you think are the ‘worst”. please feel free to comment on this list and let us know about some of your thoughts. If you want to find out some more of the worst songs, go to:    https://www.msn.com/en-us/music/news/the-most-hated-christmas-songs-of-all-time/ss-BB1bMyOr?ocid=U506DHP&li=BBnb7Kz#image=10 Have a Merry Christmas.