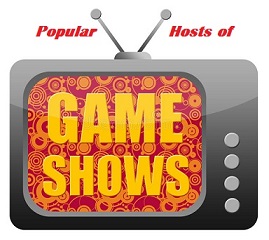 The TV world, even after a few months, is still mourning the loss of Alex Trebeck. His contributions not only to Jeopardy!, but to charities, to millions of people and his sincere love of life and people worldwide can never be questioned. Now the show is going through the process of guest hosts and will make a decision on who the new permanent host will be come September.

I have been a game show fan since the early days of TV with shows like “Beat the Clock”, “Truth or Consequences” and many more. I am sure many of you have also had your favorite game shows over the years. So with that in mind here are just a few of the popular game show hosts who have been a part of our lives.

Chuck Woolery – He was the long time host of the sexy show “Love Connection” and also emceed the show “Scrabble’ for several years. But did you know he was the original host of “Wheel of Fortune”, along with Susan Stafford as the letter turner, until 1981 when he was replaced by………………

Pat Sajak – Prior to “Wheel” Sajak was a radio dee jay at WSM in Nashville and then also worked as a fill in TV weatherman before landing the gig at “Wheel”. Since then Sajak has entered the Guiness World Records as the longest running game show host in TV history. Vanna White joined Sajak in 1982.

Gene Rayburn – The former network radio host (Rayburn & Finch), also appeared on Broadway before “Match Game” which he did from 1962 to 1984. His style, the bad boy bawdiness turned the show into one of the most popular, bringing about several reboots, but it will always be considered Rayburn’s show.

Bud Collyer – He was one of the biggest game show hosts of the 1950’s and 60’s with shows like “Beat the Clock” and the original version of “To Te ll the Truth”. He would host the show until 1968 when Garry Moore took over for a few seasons. It is interesting to note that Alex Trebeck also hosted that show back in the day.

Bob Barker – he originally came to viewers attention as the host of a popular radio show that was revised for TV, “Truth or Conseque3nces”. He emceed that show from 1956 to 1974. In 1972 he took over “Price is Right” from original host Bill Cullen and did that show until 2007, collecting 19 Emmys along the way.

Allen Ludden –  Well educated and with a very friendly guy next door demeanor, Ludden was the host of the “G.E. College Bowl”. But he became much more popular as the host of “Password” and it’ various upgrades from 1961 through 1980. He was married to Betty White and passed away from cancer in 1980.

Bill Cullen – He was considered the “Dean of Game Show Hosts” as he had hosted 23 different game shows in  his career. He survived a serious bout with polio as a child that left him with severe physical limitations, but he still became one TV’s most popular hosts doing shows like “Price is Right”, “Name That Tune”, “Joker’s Wild” and many more

In recent times we have seen reboots and updated versions of popular shows like “Press Your Luck”, “To Tell The Truth”, “Card Sharks”, “Match Game”, “Name That Tue” and many others but there is one coming in the fall of 20201 that I am really excited to see. How many remember the show “You bet Your Life” with the irascible and funny Groucho Marx?It is returning and will be hosted by none other than former Tonight Show host, Jay Leno.

Want to find out more about the game show hosts then go to:  https://www.msn.com/en-us/tv/news/the-28-most-popular-game-show-hosts-through-the-years/ss-BB19jhkP?ocid=U506DHP&li=BBnbfcL#image=6

Now it’s time for Wheel and Jeopardy!, have a great time everyone.