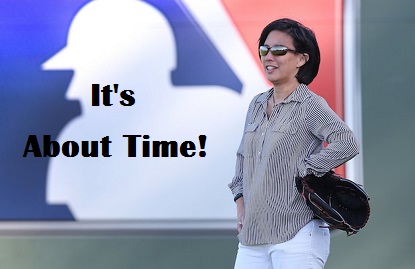 Over the past few decades we have all seen the growth in women in the workplace, politics, big business, entertainment and in sports. Many women have risen through the ranks to become Senators and members of Congress and now even a vice president. We have seen them grow in the field of entertainment as producers, directors, CEO’s of major entertainment companies. We have watched them become more and more visible in the business world heading up major companies of all kinds and we have seen them grow in the world of sports. All of these fields at one time were dubbed as a “man‘s world”. How dare a woman try to take a “man‘s” job, their place is at home in the kitchen. That was then, this is now!

In the past week, the world of sports made a historical move when MLB’s Miami Marlins hired Kim Ng (pronounced ANG) to be the teams new General Manager. She is now the first woman to run a professional sports team in any of the four major pro sports, and also the first Asian-American. Lest anyone think this was a token move for publicity for a team that has had major problems on and off the field, think again. Ms. Ng, 51, who has quite an impressive athletic background of her own, has been in this game for thirty years working for the Chicago White Sox first as an intern and then becoming assistant director of baseball operations. She then went to the New York Yankees as assistant GM and then for the Los Angeles Dodgers in a similar capacity. With all these teams she was involved in player trades, free agent signings, arbitration cases, etc. After leaving the Dodgers she joined MLB as a senior vice president of baseball operations and also overseeing the international baseball operations for MLB. To say that Ms. Ng is more than qualified is an understatement.

During all that time Ms. Ng was interviewed seven different times for GM jobs in baseball but despite her very impressive resume, she was passed over until now. It was Derek Jeter, the Marlins CEO, who had played for the Yankees while Ms. Ng was with the team and was very familiar with her background, who hired her for the GM job in Miami. He wasted no time making it abundantly clear that this was not a publicity stunt or move, but a sound baseball decision in the best interests of the Marlins. Immediately all of baseball, from executives to players to sportswriters, was in total agreement and thrilled with this hiring. It will certainly begin a new era for the Marlins and for baseball in general. It is a move that should have happened years earlier. Now it has taken place and another milestone for women has been accomplished.

So what will be next for women in professional men’s sports? Consider this, the NFL, NBA, NHL and MLB all have female coaches on a number of teams in each sport. In baseball the Yankees, A’s, Giants and Cubs have female coaches on their staffs. In the NBA almost one third of the teams have female assistant coaches, the NFL has a number of teams, including the Tampa Bay Buccaneers, with female coaches and the NHL also has a couple of teams with female coaches. So there have been some big strides made by the ladies when it comes to men’s pro sports.  These women all have been integral parts of each organization, not just “window dressing” to make teams look good and progressive.

There is also another area where MLB is still behind and that is when it comes to game officials. The NBA, NFL and NHL all have female officials taking a regular turn officiating games. However, even though baseball has had a few female umpires in the minor leagues going back to the late 70’s, not one has ever gotten a chance at being a ML umpire. The closest to get there was Pam Postema who rose through the ranks in the 70’s and 80’s going from Class A all the way to Triple A. She got glowing marks from other umpires, players and managers and many felt she would be the first, but it never came her way. To this day MLB is the only major pro sport without a female official. Now with the hiring of Ms. Ng you can be sure this will be an area that will get looked into a lot more seriously in the future. It certainly would be another major step forward for both women and MLB.

We send out our heartiest congratulations to Kim Ng for becoming the new Marlins GM. As a devout baseball fan, I am eager to follow her progress in this next step in her career and how it will continue to open new doors for women in men’s professional sports. As Bob Dylan said in song, “The times they are a-changin’”.