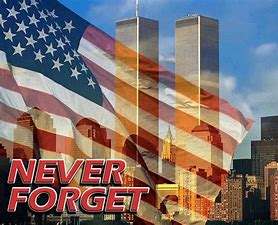 I have been around through fifteen U.S. presidents, WW II, Korea, Viet Nam, civil rights, assassinations, hijackings, Middle East conflicts and 9-11. I guess you could say I have seen it all. I served my country in the Air Force. I have lived through good presidents and bad ones, I have gotten through life during the depression, rationing, gas shortages, rising prices, climate change and the Coronavirus pandemic. Yet with all of these occurrences that have happened in my lifetime I wouldn’t want to be anywhere else than where I have been all these years, right here in the good old U.S.A.

That all being said, we are now just 3 days away from the 20th anniversary of the terrorists attack on the World Trade Center in New York City that took away almost 3,000 innocent lives, who began their day like any other, getting ready for work, getting kids off to school, commuting into the city on a late summer morning. Then at 8:46 a.m. that all changed not only for all those people, but for hundreds of millions in this country and around the world. In just a matter of minutes the World Trade Center had become the target of terrorists with one commercial jet hijacked and flown right into the building, with another to follow. In the meantime another hijacked plane was finally taken down in the Pennsylvania fields, while a fourth plane rammed into the Pentagon. It was a day where almost 3,000 innocent lives were lost, over 2,600 at the World Trade Center, 265 people on the commercial jets and 125 at the Pentagon, plus more than 6,000 injured, some permanently. It was a day that should have never happened, but it did and today twenty years later we still feel the impact of that fateful day. Like many I remember in vivid detail what I was doing on that day and time and will never forget it. Four days later it became very personal to me when I found out through a phone call that I had lost a close friend of almost forty years and his wife who were on one of the hijacked planes that hit the WTC. We had just recently made plans to get together over the coming Christmas holiday when they were coming to Florida for a short vacation.

Now here we are twenty years later and I do not hide the fact that I am very worried and scared that something could happen once again on this date. Given the fact that this was never taken all the seriously and stopped back in 1993 when the first attack on WTC happened. Then the war in the Middle East and our twenty year involvement there, the loss of lives and the problems we had with their people, with the Taliban, the removal of troops and now today everything is still on edge And There are still Americans there who cannot get out. At a very crucial time in history we are saddled with bumbling, constantly failing old man as President whose recent actions do not inspire confidence at all. He has messed up this entire scenario with his backward way of doing things and constantly shifts blame to the previous administration and others rather than on himself. Yes, I am damn worried and in fear of something happening again and I pray to the good Lord that I am 100% wrong and that we will get through this 9-11 safe and sound with all the proper recognition, tributes and displays that are necessary on this day.

Let us never ever forget that day and all those we lost. Please, regardless of your political and religious affiliation or heritage, take a moment to say a prayer for all those that were needlessly lost not only on 9-11, but in the ensuing war in the Middle East over the past twenty years. This is the United States of America and it is time we became united not divided. As we have proven since this country was founded, we may bend but we will never break. I am proud to be an American. God bless us all.