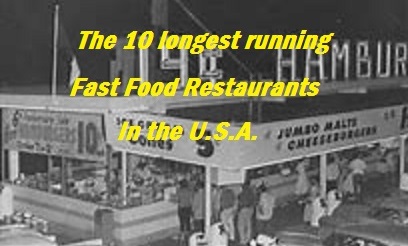 This week we take a look back at the Top 10 oldest fast food chains still going in the U.S. Now we all know about places like Burger King, Wendys, Pizza Hut, Arby’s, Subway, etc. and most popped up in the 1960’s. But long before them there were very well known and popular fast food places around the country that thrived and still operate today. Starting with number ten we go all the way down to number one, the oldest and longest running and the answer may surprise you.

10. Sonic (1953) – It all began as The Top Hat in Shawnee, Oklahoma, but changed to Sonic in 1959 when they began to franchise. Today Sonic has over 3,500 locations in 46 states and is owned by Inspire Brands who also own Arby’s and Buffalo Wild Wings

9. Jack in the Box (1951) – It all began by Robert Peterson in San Diego and is still headquartered there. There are over 2,200 restaurants with the majority located in the western U.S. But there are others in Texas and other states and as far south as Baton Rouge as well as one in Guam.

8. Whataburger (1950) – It all began when Harmon Dobson wanted to open a place with burgers so big people would say “What a Burger!”. It immediately became a hit and continued to grow. Today, it is still family owned. There are more than 670 stores in Texas and over 150 in New Mexico, Arizona and the southern UI.S.

7. Dunkin Donuts & In-N-Out (1948) – On opposite coasts of America, two very successful chains were founded. On the east coast, it was Dunkin’ Donuts, now just Dunkin’, which was originally called Open Kettle in Quincy, Massachusetts.  Out west, it was In-N-Out Burger, the first location of which opened in Baldwin Park, CA. While Dunkin has become worldwide, In-N-Out has stayed family owned and mainly in California.

6. Chick-fil-a (1946) – It was started as the Dwarf Grill by S. Truett Cathy, a devout southern Baptist in Hapeville, Georgia. As the company grew, many stayed away because of the religious and political beliefs that were part of the business mantra. Still, today there are more than 2,700 restaurants in 47 states plus Canada. It is still family owned and still continues its religious and political followings.

5. McDonalds (1940) – It originally began in San Bernadino, California by two brothers, Maurice and Richard McDonald. It was a place that offered a variety of items, but mainly barbecue. They did fairly well until the mid 50’s when Ray Kroc entered the picture and bought out the brothers and opened the first McDonald’s Hamburgers in 1955 is Des Plaines, Illinois and the rest is fast food history.

4. KFC (1930) – KFC was founded by Harland Sanders, who began selling fried chicken from his small roadside restaurant in Corbin, Kentucky, during the Great Depression. He continued to develop his methods of cooking, came up with the “11 herbs and spices” a decade later. He also saw the potential in franchising and opened the first KFC in 1952 in Utah and the rest is restaurant history.

3. White Castle (1921) – Walt Anderson and Billy Ingram began the company in Wichita, Kansas. Because sanitation in the meat packing industry back then was so poor, people were hesitant about eating ground beef. So they came up with the idea of designing the store all in white and all the employees dressed in white to give off a very clean, spotless look and it worked. Burgers sold for a nickel until 1930 when they went to a dime and stayed at that price until 1949. Today there are almost 400 White Castles in the U.S.

2. A & W (1919) – Roy Allen set up a roadside drink stand to offer a new thick and creamy drink, root beer, at a parade honoring returning World War I veterans in Lodi, California. Allen’s employee Frank Wright partnered with him and they founded their first restaurant in Sacramento, California in 1923. The company name was taken from the initials of their last names, Allen and Wright. Franchising began in 1926, the company and today has about 900 locations in the United States, Australia and some Southeast Asian countries.

1. Nathan’s Famous (1916) – It all began with a hot dog cart by a Polish immigrant named Nathan Handwerker way back in 1916. He sold hot dogs cooked using a recipe his wife developed out of this cart on the boardwalk and streets of Coney Island. They became so popular he rented out a small store to sell his hot dogs for a nickel. The company continued to grow into Nathan’s Famous and by the year 2000 there were 24 company-owned units, 380 franchised or licensed units and more than 1,400 stores in 50 states, Guam, the District of Columbia and 17 foreign countries. They are also available in many supermarkets as well.

So there you have the 10 oldest fast food chains still going today. However there are even more names on the list not near as old but very popular. To see all pof the different ones go to: https://www.msn.com/en-us/foodanddrink/foodnews/the-oldest-fast-food-chains-in-america%e2%80%94revealed/ss-AASCOtm?ocid=U506DHP&li=BBnb7Kz#image=16 it is really an interesting read about all the fast food places we know and have frequented over the years.

Now if you will excuse me I am off to have some delicious fast food for lunch. Enjoy!