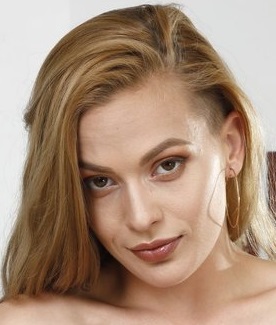 Girl of the Week – Sloan Harper

For this edition we introduce you to a very sexy blonde who is a true beach bunny. She has been on the scene for a few years and is really beginning to hit her stride now. Her fan base continues to grow due to her hot scenes both on web outlets and films, her name is Sloan Harper.

This dazzling brown eyed blonde was born on June 21, 1994 in Redondo Beach, California. While little is known about her early years, we do know she grew up and went to school in the area and that the L.A. area, especially the beaches, has always been her permanent home.

Unlike a lot of girls who jump into the adult industry right out of school at eighteen or nineteen, Sloan took her time. She didn’t make the decision to give the adult industry a try until she was twenty three. That was in May of 2017 and just over a year later, in August 2018 she was a named the Penthouse “Pet of the Month”.

She broke in by filming some hot scenes for ATKingdom and Net Video Girls. Then she was tapped to do some very steamy scenes for the Florida based Bang Bros, Team Skeet, Reality Kings and others. It didn’t take long for fans to see that this was a girl who not only personified sex, but truly loved it in every way.

From those beginnings things just kept rolling along and Sloan’s fan base continued to grow globally thanks to the internet. She did some great scenes for Naughty America an d was also selected by Greg Lansky to do scenes for his Blacked.com line. Needless to say Sloan was keeping very busy.

Since getting started back in 2017, this very sexy and sensual young lady has continued to impress with a variety of web scenes, and films, in a variety of genres. In addition to all the web scenes, Sloan has shot some sizzling films for Evil Angel, Jules Jordan Video, Tushy, Reality Kings, Zero Tolerance and Penthouse

With her looks, her sex drive and her desire to succeed and be the best,  we have no doubt that this young lady will have a rousing, success filled 2021 and continue to see her fan base grow bigger and bigger. She has everything needed to make a big impression in the industry. I am very pleased to introduce Sloan Harper as my “Girl of the Week” here on AAN.

Girl of the Week – Kay Lovely