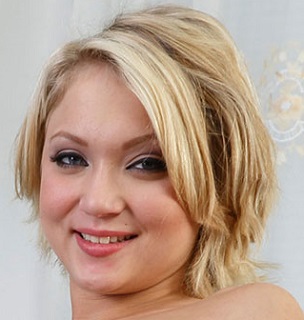 Girl of the Week – Dakota Skye

This week we introduce you to a petite blonde who has been in the business since 2014. She is a Tampa girl and is also part of our big NightMoves Adult Awards Show weekend that begins this Thursday. She is a very outgoing, fun, friendly young lady. Her name is Dakota Skye.

Dakota was born in Ohio on April 17, 1994, but when her folks separated and remarried they moved to Tampa, Florida where she was raised and went to school. After school she would move to Kentucky. She comes from a large family of seven brothers and sisters. She is a natural born performer and that became very evident growing up.

In school she was involved in the marching ban d, the color guard, gymnastics, plays the violin and trumpet and ev en did some ballet. In high school she wasn’t a preppy type choosing to wear a lot of dark colors, dying her hair a lot and in her own  words,” I think I was more of an pop punk kid throughout high school and then after I got out I kinda of bloomed into a girly girl and became who I am now.”

After graduating from   High school and now 18, Dakota got into webcamming through Chaturbate and did that for several months. She also worked at a local Wal Mart for a time. She was developing a good fan base with her webcamming and soon began doing a lot more raunchy stuff on web cam and that’s when things would really change.

She was spotted by a talent scout from East Coast Talent and her career change took place. After eight months and getting a lot of work she moved to Mark Spiegler’s agency and things have been full bore since. She is also grateful that she gets a lot of support from her mom, who was, at one time, a stripper. It is that support from family and friends that has made her career choice so much better.

Since coming into the industry Dakota has done just about every kind of genre including a lot of teen/MILOF scenes because of her very young persona and appearance. She has done work for the likes of New Sensations, Jules Jordan, hard X, Digital Sin and many more. She has also been nominated and won a number of awards. In 2014 she won our NightMoves award for “Best Feature Showgirl”

There is so much more about this down to earth, friendly, talented girl who still has many roads to conquer and awards to win. I am very happy that she is going to be part of our NightMoves Adult Awards show weekend beginning this week. I hope you will all come out see  and meet the vivacious  Dakota Skye, my “Girl of the Week” here on AAN.

Girl of the Week – LaSirena69

GIRL OF THE WEEK – Jillian Janson