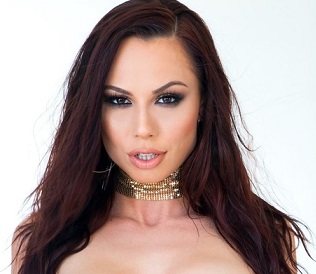 This week we are bringing your way a young lady who has been on the scene a few years, In that time she  has continued to amass a huge following because of her looks, her obvious sexual talents and her great personality. This wholesome looking mid western beauty’s name is Aidra Fox.

She came into this world on September 25, 199  born in Brewers/Bucks country, Milwaukee, Wisconsin. She has four other sisters and is of Czech, German and Polish heritage. She enjoyed a good family life butr in school she was pretty much a rebel. She admits that she w as the trouble maker kind, skipped classes and even shaved her head when she was 15.

Because the family lived in the country Aidra was very much into 3 wheeling,  fishing and going to bon fires. She hung with a fun crowd and always had an open mind when it came to sex. Aidra says she was thirteen when she lost her virginity and it happened after her sister left the house. So her and the guy she was seeing went in her mom’s bedroom and did the deed.

Aidra has close to 500 scenes to her credit since she began, so this all natural, busty beauty has quite the resume of films to look into and enjoy.  For example check out her lesbian skills in “Lesbian Interracial 2” for Lesbian X, or her down and dirty ways in “Dirty Talk 3” for Axel Braun and Wicked Pictures or the “Kitten Klub” for Adam & Eve. That’s just a small sample of her great performances.

With awards and nominations and almost 500 scenes this buxom , sexy  young lady has done it all, but still has many roads to travel in adult. She has plenty on her plate in the future and only bigger things are going to come her way. So jump on the bandwagon and enjoy this talented female. I am very pleased tio have Aidra Fox as my “Girl of the Week” here on AAN.

Girl of the Week – Cherry Kiss

Girl of the Week – Anny Aurora