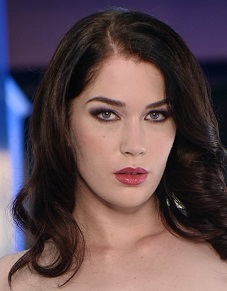 Girl of the Week – Evelyn Claire

This week we introduce you to a young lady you are going to be seeing a lot of in the future. She began back in 2017 doing web cams and developed a good fan base. Then along came films and she was catching on in big ways when the COVID-19 pandemic came along and put a stop to everything.  Meet the young, stunning Evelyn Claire.

She was born on April 11, 1996 on the coast. Yep, that is direct from Ms. Claire. She doesn’t say which coast and information about where she grew up or about her family background is kept very private. However, Evelyn does say that she was a A student in school and also quite involved with art,drama classes and even performed in and directed plays.

After high school she went to college and again got all A’s and was involved with taking classes in art and English. It was also at this time that she began working as a cam model and quickly developed a loyal fan base with her various scenes. Matter of fact she placed second in a Chaturbate contest with her  webcamming. That was in 2017 and things were about to change.

In January of that year she went to the AVN Expo in Las Vegas representing Chaturbate and was quickly intrigued by everything that she saw at the convention. But she was very impressed with the Vixen booth and how they did things. It really peeked her interest about going further in the industry and what happened next really made a change in her future.

It seems a fan tweeted Vixen owner Greg Lansky about Evelyn and how great she was. He checked her out and then got in touch with her. Lansky is very particular when it comes to the girls he shoots. So when he offered Evelyn a chance to come and work with him at Vixen and Blacked and shoot her debut film scenes, how could she say no.

So off to L.A. Evelyn went, met with Lansky, learned a few things about the industry and how he approaches things and shot her first scene with Jean val Jean for Vixen.com. That scene would be featured in Greg Lansky’s Vixen DVD Young Fantasies #2 which won “Best Ingenue Movie” at the 2018 AVN Awards. Now Evelyn was on her way.

Evelyn would perform in a number of Vixen and Blacked productions in the next year or so turning in some scorching scenes. In addition she was also getting noticed elsewhere, shooting scenes for Jules Jordan, Wicked Pictures, Sweet Sinner, New Sensation, Deeper, Burning Angel and more. Evelyn was also getting to show off her very serious acting chops as well.