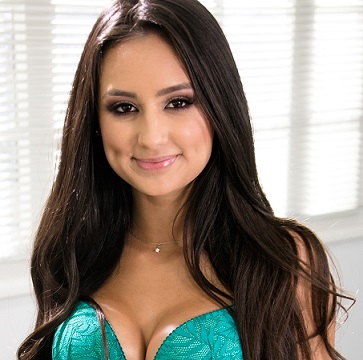 This week we once again introduce you to another one of adult’s new, exciting performers. In a very short time, this exotic beauty is making heads turn with her sizzling, all out performances. She was a nominee for Best New Starlet at the XBIX and AVN awards and now she is a nominee for the same award at our upcoming NightMoves Adult Awards Show in October. At the end of the feature will be a link where you can vote. Her name is Eliza Ibarra.

She is a California native, born in Riverside on March 22, 1997. She is of Mexican-American heritage and did all her schooling in the Riverside area. Eliza was a good student and when school was finished she went to work in a Harley-Davidson shop in the clothing department and also did a short stint at Pizza Hut.

While she enjoyed both jobs and being in retail, she knew that she might have a calling in adult. So she connected with male talent Bruce Venture through Snapchat and that was the very early beginning. They met and the slender, tall Eliza was ready to see if she could really do this. So she got together with Bruce.

As for that private session, venture was extremely impressed with her enthusiasm, her talents and determination to please. Fact is that session went on for several hours and Bruce was convinced she had what it took to make it. With that experience and Venture’s review, Eliza signed on with Mark Speigler.

Being a Speigler Girl in the adult business is quite an accomplishment as he is one of the best in the business. That was in early 2018 and since then Eliza has been on a roll doing a number of different scenes for a variety of companies. She is displaying a wide array of talents and so far everything has been positive.

As we mentioned at the top Eliza has been nominated for Best New Starlet in the upcoming XBIZ and AVN awards this month. In the short time she has been doing films she has worked for Jules Jordan, Girlsway, Hard X, New Sensations, Girlfriends Films, Zero Tolerance and others, plus a number of web scenes.

If you haven’t had the chance to see Eliza perform we have a few suggestions for you to check out. There is the very recent “Latin Asses 4” for Hard X, “My First Hotwife Experience” for New Sensations, “On the Job” for Bellasa Films and the just released “Queen of Spades Club 2” for Archangel.

With almost a full year in the business and a nomination for Best New Starlet at our upcoming NightMoves Adult Awards show you know this girl is special. 2019 will continue being a breakout year for this tall, sexy, California girl with the winsome smile and a ton of talent. You can vote by going to: https://nightmovesonline.com/vote-now/   I am very pleased to re-introduce Eliza Ibarra as my “Girl of the Week” on AAN.