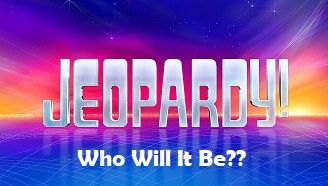 I have been a huge Jeopardy!  fan going all the way back to the 60’s when it was originally hosted by Art Fleming. Then along came syndication and rebirth of the show in 1984 with a young Alex Trebeck as the new host. Then came the sad end with Mr. Trebeck losing his 2 year battle with pancreatic cancer. Ever since his death Jeopardy! has brought in celebrity guest hosts for a 2 week run and also to raise money for the celebrities charities. It has been a fun experiment, for the most part, seeing the different styles and approaches of the various celebrities who have hosted thus far. Of course the show is looking at all of them as a potential permanent host when the new season, number 38, begins in September.

Let’s take a look at who has been the guest hosts to this point and how I personally see them. Whether you agree or disagree, these are just my own thoughts from what I have viewed to this point.

Ken Jennings – The all time money winner on the show, Jennings came across a little stiff, but loosened up some over the two weeks. He was dry, did have a nice appearance, very kind in his words about the show and Alex as we expected. His way with the contestants was a little bland and reading the answers to the questions came off somewhat monotone. I rank him a B

Mike Richards – The Executive Producer of the show was literally a last minute selection (like one day’s notice!). However, you would never know it from the first show to the last. He was smooth, articulate, had a winning and affable way with the contestants and made a nice presence on camera. He had great inflections with words and phrases that made it all very comfortable.  I rank him an A+

Katie Couric – Sorry, I used to be a fan of hers, but after her off the rails comments regarding President Trump and his “rioting mob” she lost me. She was also the subject of a petition by Jeopardy! fans to not have her on the show. To be honest, she was okay, not great and had a certain charm (that seemed staged) with the contestants, but just didn’t have the warm fuzzies. I rank her a C-

Dr. Oz – Okay let’s cut to the chase right away. He is, so far, the worst of the group. Zero personality, a big hint of “it’s all about me”, no warmth and rapport with the contestants, an annoying harshness to his voice when delivering the clues and absolutely no humor, though he tried. I rank him a D

Aaron Rodgers – The biggest surprise thus far. Day one he was obviously nervous (who wouldn’t be?), but then it all kicked in and rest of the shows, he was very personable, had a good sense of humor, his pronunciation was excellent, the rhythm was very good and on camera he had the look. To be honest there were  hints of a young Alex Trebeck in Rodgers show style and look. I rank him an A+

Anderson Cooper –  Granted it has only been 2 shows, but it was difficult to see him in that role after watching him the past couple of days doing his news thing regarding the Chauvin trial, Biden and other issues. However, that said, I found his delivery decent but a little fast, his rapport with the contestants was pretty good and there was a hint of a sense of humor. I rank him a B.

Following Cooper there will be CBS correspondent Bill Whitaker, NBC’s Sarah Guthrie, actress/neuroscientist Mayim Bialak, neurosurgeon Sanjay Gupta and scraping the bottom of the barrel they are bringing on sportscaster Joe Buck  (Why Jeopardy! why??) and a few others to be announced.

As for me, I truly believe it will come down to two people, Mike Richards and Aaron Rodgers. Richards was excellent, but will he want to give up duties as exec producer of Jeopardy! and sister show “Wheel of Fortune”? As for Rodgers, he obviously still has another season or two left in the NFL, but seeing as how they only work 46 days a year to put all the Jeopardy! episodes together for the entire season, Rodgers could easily do both. I am leaning toward Rodgers. He is a TV natural, he has that “Trebeck” aura, he has the backing of Mike Richards and it’s a hell of a way to start a new career after the NFL. Now we wait until September when the show’s 38th season is ready to begin and the announcement is made.