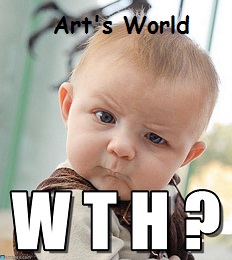 This edition is about three incidents that have really made me go “What the hell?” It really makes me wonder where people’s brains, if they have any, are. Judging from these stories, they are equipped with ignorance and stupidity which are seemingly the rule of the day. I am sure after you read these, you will also be sayng, “What the hell.”

Okay, whether you are a baseball fan or not, everyone is aware of the cheating, sign stealing scandal the Houston Astros created in major league baseball. We all know about the fines, the punishments, bans, etc. We have heard the outcry from players speaking out against their baseball brethren for what they have done to the game as a whole. We have heard the phony apologies from Astro players. We have read all the sports reports from various writers and now as the spring training exhibition games begin it has gotten even worse. Astros players are going to be targets every time they come to bat and every city they go to play and that is to be expected.

However, while fans of the game and other teams are rightfully upset, there are a few that have taken that dislike of the Astros to extremes. Josh Reddick an outfielder for the team says he has received death threats, as have several other players. Reddick said he has even gotten e-mails wishing cancer on his daughter and family.  Say what??

I am sorry, but that is flat out sick and demented and I am glad that information has been turned over to law enforcement. It’s one thing to be a fan, but when you make death threats, wish cancer on a child or worse that is crossing the line big time.  While these type threats are a small percentage, given this crazy world today  and what has taken place, you cannot be too careful. It is going to be a very trying time for the Astros. Message to the fans: Forget the stupid remarks and ignorance, the best way to get back at them is by your team beating them on the field of play.

Every year at this time we all look forward to one of the best treats of the year, Girl Scout Cookies! We all dig into our pockets and when we see these young girls with their moms outside a big store with a table full of boxes of cookies, we can’t resist getting some and enjoying them. We are happy to pay whatever the cost may be because it is helping their Girl Scout troops to do better things and help these young girls grow. But lately there have been a few instances of people with little or no morals, conscience or caring and have taken advantage of these young girls and their cookie sales.

Just recently out in Oregon the police arrested a man who was buying cookies with fake $20 bills and getting real change back. Fortunately, one of the mothers was smart enough to realize the bill was fake, called police and they arrested the man a couple of days later and the loss was minimal.

Now we have just had another “Cookie Monster” here in the Bradenton area that has been dropping counterfeit $50 bills and getting real change back for his purchase. So far the amount lost is over $650 that the G irl Scouts hav e to make up for the cookies sold. So far the police have not made an arrest, However, local people and businesses are stepping forward to help make up the amount that was lost on these counterfeit sales. I am truly sorry to see this happen, but why are they allowing these girls, even with the mothers present, to accept something like a $50 bill? I would think that a $20 would be the maximum they could take. In any event I hope, like the police in Oregon, that the cops here catch this scumbag who cheated these girls out of that money.

As a senior, a proud American, a veteran and a man who loves his country, I am once again dismayed, disappointed, angry and feel like we got slapped in the face by seven people who claim to have the country’s best interests at heart. You would have never known it last night looking at that stage.

Of course I am referring to the Democratic Debate last night in Charleston, South Carolina. When the seven candidates took the stage for the debate once again there was something missing. Not one American Flag was seen anywhere on that stage. There was not even a video image of “Old Glory” being projected behind them, nothing. But there was plenty of room for CBS to promote and advertise their network during the debate.  Oh, some will say, “but the entire stage was red white and blue.”  Yes, but how many countries use the red white and blue as the colors for their flag and country? The answer is 29! So those colors on that stage really meant nothing without our flag being there where it should be.

The Democrats should be totally ashamed of themselves for not insisting that American Flags adorn the stage of their debates. They claim they want what is best for this country, but they show no display of patriotism by ignoring the placing of Old Glory in prominent view. I am sorry,  I take that as a personal slap in the face. Whether you like him or not, whether you are for or against him, the one thing you will ALWAYS see at a Trump rally or appearance is the American flag, or flags! There is no excuse for our flag not to be on view at something as important as these debates when they all claim to want your vote so they can right the wrongs and do what is best for all. If that’s the case then start be honoring the flag of the country you live in and want to represent and improve!

Art’s World – Some Fun Facts about the Oscars

Art’s World – Where Did the Time Go??