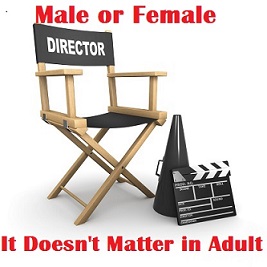 Art’s World  – Male or Female, It Doesn’t Matter in Adult

Back in 2017 I wrote piece here on AAN regarding female film directors in mainstream Hollywood and in the adult film industry and did a follow up in 2018, https://aan.xxx/it-was-a-ladies-night-at-the-avns-was-hollywood-paying-attention/ I said then that mainstream could learn a lesson, which apparently they haven’t, from adult. Since that article very little has changed in mainstream Hollywood regarding female directors getting their due with Oscar nominations and wins. It looks like it will still be the “good old boys club” again when the 2020 Oscars roll around in March,

However, when it comes to adult films it is just the opposite where the women are not only accepted as directors, but encouraged. I just want to take my hat off and salute these ladies for the fine work they continue to produce for the entertainment and enjoyment of adult film fans everywhere. While most people tend to think the industry is a totally male dominated business, it has changed with the times in many areas of the industry. Women are becoming more and more of a focal point in adult other than being strictly sexual performers. Today there are women who head up their own adult companies, women who write, produce and direct. In addition you have a number of women in important executive positions with various companies.

As for the directors who have become so prominent, it wasn’t always that way. Oh there were a few back in the early days that blazed a path like Gloria Leonard, Ginger Lynn and Candida Royalle. The big change came around 2002 when a new upcoming star, Stormy Daniels, wrote a screenplay that was bought and put on film. Then in 2004 she directed her first film “One Night in Vegas” and from that point on she was off to the races not just a performer, but also as a writer/director capturing a number of awards along the way. (Hell,  I even had cameos in two of her films!). With that success for Wicked Pictures it began to open the door for more and more women to begin showing their talents as film directors.

Today you have award winning female directors like Kay Brandt, Jacky St. James, Mason, Kayden Kross, Joanna Angel, Angela White, Bree Mills, Dana Vespoli and more. All these ladies have given fans of adult every kind of genre from drama to comedy, fantasy to romance, and fetish to lesbian. Many of their films have garnered much critical acclaim along with the nominations and awards as the door for female directors continues to stay open. In this past year another new name has become a force, Missa X. Award winning performer Whitney Wright has just completed her directorial debut with the critically acclaimed and award nominated film  “Adelaide”. Performer Serene Siren also just completed her fourth film for Girlfriends Films as a director.

As we move forward into a new year, I am sure we will see, unlike mainstream Hollywood, the adult industry continue opening to more women as writers, producers and directors. There has been a big increase of women, of all ages, becoming fans of adult films and enjoying what they have seen. So it only makes sense to tap into these talented ladies within the industry for more than just their sexual talents.

With our NightMoves Adult awards already concluded, and the XBIZ and AVN awards coming in January 2020, I congratulate all of these multi talented ladies for a job well done and wish you all the very best in your nominations and hopefully wins at the upcoming awards. You are all very deserving and as a film reviewer and critic I cannot wait to see what you all will bring our way in the new year.