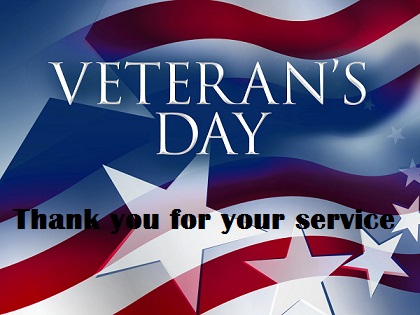 Today is Veteran’s Day, a day to honor all our veteran’s past and present for their service to our country. Originally it was known as Armistice Day and celebrated the end of World War I. It is celebrated as a Federal Holiday on this date because the war formally ended at the 11th hour of the 11th day of the 11th month of 1918, when the Armistice with Germany went into effect. In 1954 at the urging of various veterans groups, the day was renamed Veteran’s Day. In addition the White House has once again proclaimed the month of November as “Veteran‘s and Military Families Month” which they have done since 2016 to honor these men, women and families.

I am very proud to have served in the U.S. AirForce. I am sure we have all lost loved ones who gave the ultimate sacrifice in WW II, Korea, Viet Nam, Afghanistan, Iran or elsewhere over the years. We have also been very fortunate to have family members and loved ones serve and able to return and go on with their lives, though for some it becomes a tough battle. We have all heard the countless stories about drug addictions, suicides, homelessness and failures within our VA system when it comes to veterans. I do not want to make this piece political and go on a rant about all the wrongs that our veteran’s face once they return to civilian life. My only intent here is to remind everyone of this special and important day and to also add a little lighthearted “ Did You Know” to this just for some trivia fun.  So I hope you will enjoy a few facts about some very well known celebrities who were also war heroes that many may not know or be aware of.

Clark Gable – The Hollywood heartthrob went into the Army in 1942 at the age of 40. He was in the 8th Air Force flying many combat missions on B-17’s over Germany as both a gunner and radio man. He was awarded  the Air Medal, the Distinguished Flying Cross, American Campaign Medal, European-African-Middle Eastern Campaign Medal, and World War II Victory Medal.

James Garner – The future star of Maverick and The Rockford Files served in the Army during the Korean War. He was with the 5th Regimental Combat Team that made many secret raids and lost a lot of men. Garner received two Purple hearts for his service and injuries.

Dan Blocker – We all remember Hoss from Bonanza, but before that Blocker had quite a military period. He served in the Army during the Korean Wa r  as a sergeant with the 179th Infantry Regiment, 45th Infantry Division. He received the Purple Heart but also the National Defense Service Medal, Korean Service Medal with two bronze campaign stars, Republic of Korea Presidential Unit Citation, United Nations Service Medal and Korean War Service Medal.

Mel Brooks – The funny man writer, actor and producer was anything but funny during his time in the service. He served in the Army with the 1104 Engineer Combat Battalion, 78th Infantry Division. He had the rank of corporal and his assignment was defusing land mines as the allies advanced into Nazi Germany.

Eddie Albert – He was a movie and TV star best known for the TV show “Green Acres”. But before he hit it big on television and movies Albert was quite the military hero. He was a Navy Lieutenant and during the invasion of Tarawa in  November, 1943, Albert rescued doze ns of stranded and wounded Marines from the landing craft he commanded while under heavy enemy machine-gun fire. He was awarded the Bronze Star with Combat “V” for his actions.

There were many celebrities who fought in WWII, Korea and Viet Nam and took part on battles rather than some cushy PR job in the military. Among them were James Stewart, Ed McMahon, Chuck Norris, Drew Carey, Gene Hackman, Bea Arthur,  Don Adams, Don Rckles, James Arness, Henry Fonda and so many more.

I would ask one thing of you all. If you see a member of the military in your travels today, just say a simple “Thank you.”   It will mean so much. Happy Veteran’s Day.

Art’s World – A New Theme Park to Open In November