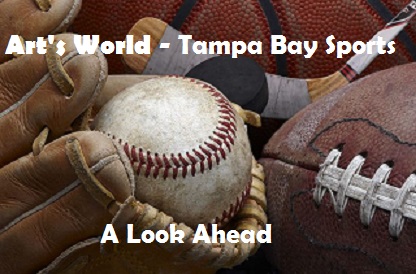 Last week I got on a little rant about what is going on in this great country and got things off my chest to a degree. Then the football games came along and I was taken, at least for the weekend, to another world, a world that I love….sports which helps me keep my sanity. So this week I want to keep it light and talk about all the good sports happenings right here in Champa Bay.

First of all, like most I was very surprised, upset, disappointed in our Bucs futile game play against the Rams that caused them to lose and not move on. Granted they had a great comeback in the 4th quarter, but you play the game for all four, not just one. The end result was no chance for back to back Super Bowl wins. But there is much more than the loss to be concerned with and it all starts with #12. Will he be back or will he retire? He has had an amazing career and even at the age of 44 he can still play the game like a 25 year old. He is a competitor and hates to lose, so will he give it one more year as a Buccaneer and try to get our team to the Super Bowl in 2023?My heart and gut are really on the fence with this one. I think the ultimate decision to be made will come down to family versus the NFL and right now it could go either way.

Then there are possibilities of losing Offensive coordinator Byron Leftwich and defensive coordinator Todd Bowles, as both are scheduled for interviews for head coaching jobs. In addition to that the Bucs have some major players like Fournette, Godwin, Gronkowski, Pierre-Paul,and more who are free agents. Will they stay, will they go, will the Bucs try to rework some contracts to keep these important pieces on board? It is going to be a very interesting off season to be sure, so stay tuned because there should be some big time news coming out of One Buc Place in the weeks and months ahead.

Now with the Bucs season over, fans can offer more concentration on the Lightning and the Rays. As for the Lightning, they are off to a great start in the first half, even though they did not have Kucherov until two weeks ago. They also battled other injuries to Brayden Point, Anthony Cirelli and a few others but the team stepped up and did what they continue to do, mix and match and win. Currently they are at the top of their division, have the best overall record in the NHL and the most points. With the All Star break coming up very soon the Lightning with the exception of Stamkos, Hedman, Point and Vasilevskiy who will be in the All Star game, can get a few days needed rest, heal some bumps and bruises and be ready for the second half and their quest for three in a row. That is a tough thing to do, but if any team is up to the challenge it is the Lightning. Coach John Cooper is very fortunate to have a solid farm system with Syracuse and Orlando where players have come in for a few games and done the job they were asked to do. You can expect the same in the second half. Can the Bolts make it three in a row? It’s still a bit early to tell, but if I were a betting man I would not bet against it.

As for the Rays, MLB is still in a lock out and it doesn’t seem, at this point, that it will all end very soon. That being the case it will delay the start of spring training. For how long, who knows? But whatever delay there is will have an effect on every ML team not just the Rays. If the lock out is prolonged and spring training gets a very late start it will derail any set plans the Rays had for putting the 2022 team together. All that said, with the team they have right now, without any deals being allowed to be made, is a contending team. They have the right mix, the only major loss was Joey Wendle, but with the likes of Franco, Lowe, Meadows, Arozarena and others plus a little more seasoned and young starting staff they have the chance to be as good as 2021 and head to the post season. But right now all eyes are on this lock out, so let’s end it and play ball.

Finally, for all you football junkies out there, you will have football in Tampa Bay between the weeks and months before the Bucs start up again. That will come in the form of the Tampa Bay Inferno of the WFA  (Women’s Football Alliance) whose season gets underway in April. The league has been operation since 2010 and the Tampa team under other nicknames has been in the league since 2012 and is coached by one of the Tampa Bay Buccaneers female coaches. It is NOT flag football, it is NOT indoor Lingerie League football, it IS full scale rock ‘em, sock ‘em NFL rules tackle football. The league has three divisions coast to coast and the Inferno will play teams in their division that are in Boston, DC, Jacksonville, Pittsburgh, Miami and more. The season runs from April through July with the championships played the end of July. You will be hearing a lot more about this team in the future. I for one am looking forward to it.

So there you have my take and thoughts on the Champa Bay sports scene for now. It will be interesting watching the Lightning try for a threepeat, the moves the Bucs will make and the fortunes of the Rays for the 2022 season and the rise of the Tampa Bay Inferno to add even more to the fire. There is nothing like being a sports fan in Champa Bay!

Art’s World – Inventions by Women that Changed How we Live