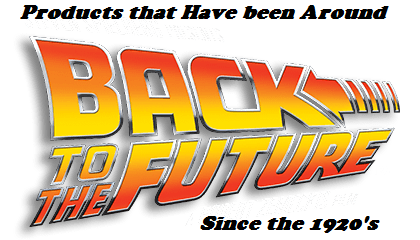 You all know that in a couple of my “Art’s World” features how I have touted the shows on the History Channel. Specifically shows like “The Titans who Built America”, “Food that Made America”, Machines that Built America” and others showing in great detail how this country literally was built. The series runs every Sunday evening at 9 p.m. EST on the History Channel and is well worth a look. So it got me to looking back a hundred years ago. What products were invented and came along back then that are still part of our lives today? Here are just fourteen of them and some may surprise you.

1920 – Eskimo Pie – Who doesn’t like this long time ice cream favorite. Invented by Christine Nelson she teamed up with Russell Stover, of chocolate candy fame, to make this into a best seller that initially sold for a nickel. Today it is still a very popular ice cream treat.

1923 – The Instant Camera – The first instant camera was actually created by Samuel Shlafrock in 1923 but was not successful. The instant camera has consistently evolved over the years into today’s digital camera. The first commercially successful instant camera did not hit the market until 1948 from Polaroid.

1926 – Power Steering – Francis W. Davis invented the first practical power steering system. However, due to cost factors, even though it proved to work, major automakers would not use it. It would be the late 40’s and early 50’s before it was widely accepted.

1927 – The Juke Box – The Automatic Music Instrument Company built the first automated instrument. The idea of putting a number of records in this machine and then being able to select a song to play caught on. It gained popularity in the 1930s, and then again after WW II and became a big part of the 1950’s rock and roll culture.

1928: Chef Boyardee – It was created by a respected, Cleveland Italian chef, Ettore Boiardi. He began selling prepackaged versions of his dinners in 1928 and changed the name on the package to Boyardee so consumers could  pronounce his name. Today, Boiardi’s image is still featured on his products.

1928 – Ice Cube Trays – It was invented by Lloyd Groff Copeman in 1928. Soon  ice cube trays became a household item replacing crushed ice or ice blocks. With the use of ice cubes in drinks it created the popular phrase, “On the rocks.”

There were a lot more things we use every day that were invented in the 1920’s, so check them all out at: https://sciencestruck.com/inventions-of-1920s  You will be surprised to see just how many things have been around for 100 years. And that does not include me, I may be fairly close but I’m not there yet! Be sure to also check out the History Channel for those great shows I mentioned, they are very much worth your time.