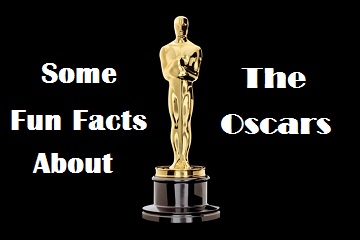 Art’s World – Some Fun Facts about the Oscars

This week, no politics, no rants, no sad or bad topics, just a little light entertainment and trivia regarding Hollywood and the Oscars.

The annual awards extravaganza usually take place in February. However, because of the pandemic, it was changed to later in the year  and will be presented on April 25, 2021.The nominations will be announced march 15. Because of the pandemic the show will be at least partially in-person, but taking place with smaller groups at multiple locations, with the Dolby Theater remaining the home base. This way they will insure the public health and safety of all those who will participate in the program.

This will be the 93rd edition of the Academy Awards and it will be telecast for the 45thstraight year by ABC-TV. Now here are some interesting tid bits about the Oscars.

Only two actors have ever won an Oscar posthumously. Heath Ledger for Best Supporting Actor in 2009 for his role as The Joker in the Dark Knight. There was also Peter Finch in 1976 for Best Actor in the film Network. Ironically, both men were also from Australia.

Due to metal shortages, any Oscars awarded for a period of three years 1942 -1945, during World War II, were made of painted plaster instead of gold. The winners, however, could exchange them for the official statuette after the War ended.

As for odd Oscars, there was the one awarded in 1937 to Edgar Bergen. It was an honorary Oscar to Bergen’s Charlie McCarthy, his ventriloquist’s dummy. It was made of wood, and had a movable mouth.

After winning the Best Actress award for Cabaret in1972, Liza Minnelli became the only Oscar winner whose parents were also Oscar winners. Her mother, Judy Garland, received an honorary award in 1939 and her father, Vincente Minnelli, won Best Director for the film Gigi in1958.

The first film in color to win the Best Picture Oscar was 1939’s “Gone with the Wind”. It should be noted that Clark Gable only got the Rhett Butler role because Gary Cooper felt the film would be a flop and turned it down.

Harold Russell, who lost both hands in an explosion while in the Army, was one of only two non-professional actors to win an Academy Award for acting (the other being Haing S. Ngor). Russell received a Best Supporting Actor Oscar in 1947 for his role in “The Best Years of Our Lives”.

Since the very first Academy Awards in 1929 hosted by Douglas Fairbanks to the present, there have been a wide variety of hosts for the show that read like a who’s who of Hollywood. However, the star who hosted the most in Oscar history was Bob Hope who emceed the show 19 times.

How long is the red carpet that all the stars appear on? It is actually longer than the length of a football field. Once it is rolled out on Hollywood Boulevard in front of the Dolby Theater it measures out at 500 feet long.

The Oscar statuette is made from a Britannia metal, a pewter-like alloy which is then plated in copper, nickel silver, and finally, 24-karat gold. It stands 13.5 inches and weighs 8.5 pounds.

You can find out more Oscar fun facts by checking out the two sites listed below.

Photo courtesy of oldtimeradiodownloads.com, Publicity still for “The Best Years of Our Lives”, 1946 courtesy of commons.wikimedia.com