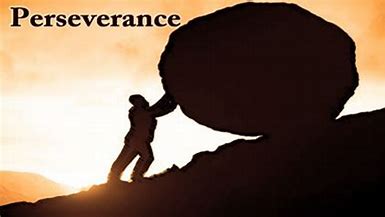 This week I want to talk about perseverance. It simply means to persist in your quest in spite of difficulties that may arise. No matter what it is, a school paper, finding a career path, having an idea that could change lives, going against the odds and much more. Perseverance is a trait we all have but too many fail to use it and take advantage of what it could mean for the person and the path they will follow.

There are many different directions and paths perseverance by so many individuals throughout history that have given us the world we live in today. What if these dedicated and determined people had given up and thought they were just wasting their time and decided to move on in other directions, where might we be today? It took belief in themselves and the perseverance against the odd to prove what they wanted to accomplish could really happen and work. It didn’t happen overnight, in many cases it would take years to accomplish but the purveyors of these ideas to make a better world never gave up, they never turned away from the challenges. They met them head on and conquered them, and gave the world what many said could never be done or happen. Perseverance.

So many things that are a part of our lives today happened because of perseverance and not giving up regardless of what others might have said. Edison, Ford, Wright Brothers gave us electric light, music, photos, automobiles, airplanes. Their failures never made them stop in what the believed they could make happen. We were watching another episode of a show on the History Channel the other night and seeing even more examples of perseverance in the ”Food that Built America” series. It was about Glen Bell and the Raffel brothers. When the drive-in hamburger craze hit America in the 1950’s these gentlemen had other ideas and persevered. Glen Bell felt he could compete with the big hamburger boys with something different and followed through but failed. He didn’t give up he kept at it and after several years his idea became a success despite people telling him it would never work. Today that idea is all over the world and known as Taco Bell. As for the Raffel brothers they had a very lucrative and successful restaurant supply business in Ohio, but they also had a way to compete with the hamburger empires. Against all odds they sold their company to go with this new idea and initially met with failure, but their perseverance paid off. Today they are also a mainstay all over the world known as Arby’s.

I have had my own run with perseverance and never giving up on something even though it took more than 40 years to accomplish. Back in the late 60’s and early 70’s I had an idea for a book. In 1973 I wrote a draft and took it to several publishers and was turned down flat over the next couple of years. I never gave up the idea and here and there over the years after moving to Florida, I would tweak it and then submit it and still get rejected. I knew I had something special and was not going to give up on it. So, I went all out to redo it, reformat it and finally in 2015 this book idea I had for more than forty years became a dream come true when Richter Publishing here in Tampa Bay, published my book “When Swing Was King” and it got some national exposure. I am thrilled to say it is still available through Amazon and Barnes and Noble. Again, perseverance was the key and a dream that was more than 40 years old came true and gave me a reason to start work on another book  (which I am still working on).

In closing I have to add one more instance regarding perseverance. If you want to see living, breathing proof and examples of what that word truly means, look no further than the people of Ukraine. They are the epitome of perseverance in ways many of us are filled with wonder over the resilience they show the world every day. In the end, they will win because of it. God bless them.

Never give up, never stop trying and always remember that today is the tomorrow you dreamed about yesterday.