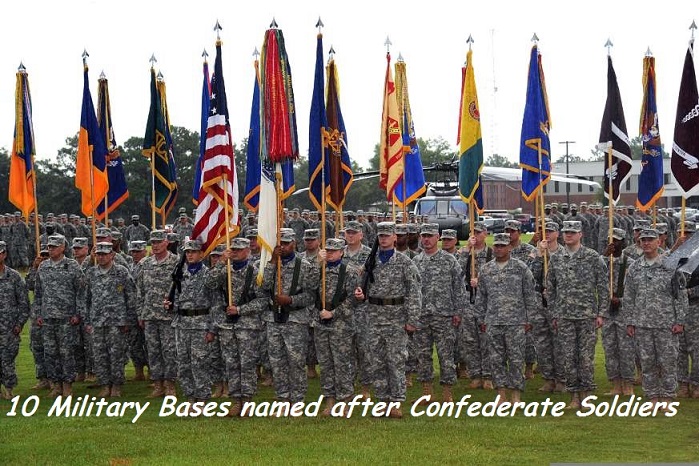 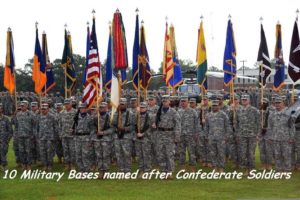 Over the past year or so there has been a major fuss made about statues honoring solders of the Confederacy. Protests, marches, statues torn down, destroyed, moved, etc. Somewhat lost in all this is an ironic twist in that there are 10 U.S. military bases named after Confederate soldiers. Not one has been protested against and/or asked to change its name because of its association with various statues and monuments of the men of the Confederacy. Here is a brief history of  these installations and who they were named after.

Fort Rucker – It began operating in 1942 and is located in Alabama about 90 miles south of Montgomery. It is a primary flight training base. Operational units on the post include the 1st Aviation Brigade and the 110th Aviation Brigade handling Army Aviation training, and the USAF 23d Flying Training Squadron for the training of Air Force helicopter pilots and air crew. In addition there are other units located at the fort in a variety of operations.  It was named after Confederate General Edmund Rucker.

Fort Lee – Located in Virginia it began in 1917 – 1924 and then again 1941 to the present. It is headquarters of the United States Army Combined Arms Support Command/ Sustainment Center of Excellence, the U.S. Army Quartermaster School, the U.S. Army Ordnance School, The U.S. Army Transportation School, the Army Logistics University, Defense Contract Management Agency, and the U.S. Defense Commissary Agency. It was named after Confederate General Robert E. Lee, who, by the way, was opposed to Confederate statues and monuments.

Fort Pickett – It was built in 1941 and was a major stopover before Army troops left for overseas in WW II. Today, it is a Virginia Army National Guard installation. Home of the Army National Guard Maneuver Training Center, Fort Pickett is named for the Confederate Army General George Pickett. Pickett ordered the execution of 22 Confederate deserters found to be fighting among the U.S. troops.

Fort Hood – Located between Waco and Austin, Texas, it began operations in 1942. Fort Hood’s origin was the need for wide-open space to test and train with World War II tank destroyers. Today Fort Hood has over 40,000 soldiers and 8,000 civilian employees. The post is named after Confederate General John Bell Hood who commanded the Texas Brigade during the Civil War

Fort Polk – Located in Vernon Parrish, Louisiana, this U.S. Army installation began in 1941 and has held many different titles through the various  decades of WWII, Korean War, Viet Nam war etc. Today it is home to almost 10,000 troops and is the Army’s Joint Readiness Training Center. It was named after the Right Reverend Leonidas Polk, the first Episcopal Bishop of the Diocese of Louisiana, and a distinguished Confederate General in the Civil War.

Fort A.P. Hill – This installation began in June of 1941 and has been in use ever since. Today, it is a training and maneuver center belonging for the United States Army located near Bowling Green, Virginia. The center focuses on arms training and is used by all branches of the U.S. Armed Forces. It has also been home to a number of Boy Scout Jamborees over the years as well. It is named after Virginia native Lieutenant General Ambrose Powell Hill Jr., who was killed in action during the Civil War.

Fort Gordon – Located outside Augusta, Georgia it originally began as Camp Gordon in 1917 with the advent of WW I as training site and home of the famous 82nd Airborne Division . Shut down in 1920 and then reopened in 1941 as Fort Gordon. It is the current home of the United States Army Signal Corps , United States Army Cyber Corps, and Cyber Center of Excellence. It is named after   Confederate Lieutenant John Brown Gordon who would later become a U.S. Senator and Governor.

Fort Bragg – Located outside Fayetteville, North Carolina, it has been in operation since 1918 in various capacities. Today it is the world’s largest military installation with 50,000 active military personnel. It is now the Army’s XVIII Airborne Corps and headquarters of the United States Army Special Operations Command, which oversees the U.S. Army 1st Special Forces Command (Airborne) (Provisional) and 75th Ranger Regiment. It is also home to the U.S. Army Forces Command, U.S. Army Reserve Command, and Womack Army Medical Center and much more. It is named after Confederate General Braxton Bragg who was also a slave owner and is considered by historians to be one of the worst generals of the Civil War.

Fort Benning – It is located at the Alabama-Georgia border next to Columbus, Georgia and been in operation since 1918. It supports more than 120,000 active-duty military, family members, reserve component soldiers, retirees, and civilian employees. It is the home of the United States Army Maneuver Center of Excellence, the United States Army Armor School, United States Army Infantry School, elements of the 75th Ranger Regiment, 3rd Brigade – 3rd Infantry Division, and many other additional tenant units. It was named after Henry Lewis Benning Confederate Army General who also led the fight to have Georgia secede from the Union and was against freeing the slaves.

Camp Beauregard – Located in Rapides Parish in Louisiana it was begun in 1917 as a training base for soldiers going to battle in WW I. Today it is operated by the U.S. Army and the Louisiana National Guard. Headquartered at this installation are te 256th Infantry Brigade Combat Team of the Louisiana Army National Guard, the 225th Engineer Brigade, the largest engineer group in the army and also the 199th Regiment (RTI) is headquartered in Camp Beauregard as well. The installation was named after Confederate General Pierre Gustave Toutant-Beauregard. After the war Beauregard returned to Louisiana. He was always against slavery and wanted equality for blacks. After the war ended he advocated for Black civil rights and Black suffrage and served as a railroad executive.

An interesting history of these 10 military installations and the gentlemen they were named for. There is a lot more to be found on each of these installations and a lot more history about the men whose name they bear. If you are so inclined, check them out. I know a lot of this I learned about in my school years back in the day, but that was then. Today, this is the kind of history that unfortunately our children today will never learn about or be told about.