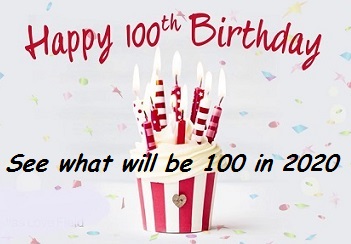 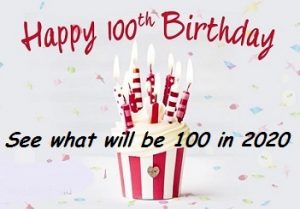 In three days we will enter into the new year of 2020. It is a memorable year as one hundred very significant happenings will be celebrating their 100th year. Some will surprise you in that they have been part of our existence since 1920. While there are one hundred that will hit the century mark in 2020, we’ll give you just a dozen of them in no particular order. You can find all one hundred on the link we will have at the end. Enjoy.

1. The 19th Amendment to the Constitution – While women in the Wyoming territory were allowed to vote back in 1870, women elsewhere in the country were prohibited. It wouldn’t be until 1920 when this amendment was passed and added to the Constitution that would now allow all women the right to vote.

3. Perdue Farms – Yep, you’ve seen the commercials for their chicken on TV over the years.  I’ll bet you had no idea they have been around providing chicken to families and stores since 1920.

4. Qantas Airlines – The Australian airline is the third oldest in existence. Only KLM and Avianca are older  and only by a few months. It was formed in 1920 by two WW I vets who wanted to bring Australia to the world.

6. AMC Theatres – It all began when Maurice, Edward, and Barney Dubinsky purchased the Regent Theatre in downtown Kansas City, Missouri in 1920. Since then it has grown into the largest theatre chain in the world with over 900 theatres worldwide. They were also the first to form multiplex theatres back in 1962.

7. Doctor Dolittle – We all know about the very popular movie about this man and the new one coming in 2020 with Robert Downey Jr. But did you know that the actual book in the popular series was first written and illustrated in 1920 by the British author Hugh Lofting

8. Indian Scout – The popular entry-level bike from Indian Motorcycles Company  made its debut in 1920. To celebrate this major milestone, the brand is releasing two special models in 2020, the Scout Bobber Twenty and the 100th Anniversary Scout which should be a treat for motorcycle aficionados.

9.  Radio Station KDKA – The brainchild of the Westinghouse corporation, this Pittsburgh station went live on the air on Nov. 2, 1920. It was an experiment they hoped would work and help keep people informed and entertained. It worked as more than 600 commercial radio stations came along in the next few years and continued to grow. Today KDKA and KDKA FM continue 100 years later.

10. Eskimo Pie Ice Cream Bar – Christian Kent Nelson  owned a store in  Onawa, Iowa. One day a young boy had trouble making up his mind whether to buy  an ice cream cone or chocolate bar. It gave nelson an idea and he created   an ice cream covered in chocolate on a stick and called it an Eskimo Pie. It became an immediate hit and is still a popular treat today one hundred years later.

11. The Olympic Rings – The 1920 Summer Olympics in Belgium were the first games in which the Olympic flag and the symbol of five interlocking rings appeared. The design was meant to represent unity after World War I. The famous rings are still a big part of Olympic tradition one hundred years later.

12. Lincoln Automobiles – Henry Leland co-founded Cadillac in 1902 and formed the Lincoln Motor Company 15 years later. In 1920, the first Lincoln motorcar was completed. Leland came up with the name of the company and car as a way to honor the first president he ever voted for way back in 1860.

There you have just a dozen of various businesses, happenings, companies, historical events, etc. that will turn 100 in 2020. It is amazing to think just how long it has been with some of these and proves that time does fly. Check out the entire list and be ready for some surprises. Go to: https://www.msn.com/en-us/lifestyle/did-you-know/100-things-turning-100-in-2020/ss-BBY62EI?li=BBnb7Kz&ocid=U506DHP#image=5