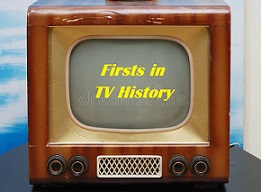 Television has been around a lot longer than many people think, but it wasn’t until the mid/late 1940’s that it began to become part of the household. From those early days of black and white 10” and 12” screens to the gigantic screens and TVs of today, the medium has had it share of firsts. So come along with us as we give you some of those ‘firsts” and see how many you might remember, At the end we will give the link so that you can see all fifty that are in this piece.

1930: First television drama – It was used in 1930 by the British Broadcasting Corporation for an experiment. Using only three characters and with a short length of half an hour, the experiment was considered a success, paving the way for future scripted television.

1936: First live sports broadcast – The 1936 Summer Olympics in Berlin was not only the first Olympic Games to be broadcast on television, but the first live televised sporting event in the world. More than 70 hours of coverage were broadcasted to special rooms throughout Berlin.

1947: First televised children’s show – Not too many television shows can claim to be the first created for children, but some early innovators include puppet shows “Kukla, Fran and Ollie,” “Howdy Doody,” and “Captain Kangaroo.” These shows would feature friendly hosts, casts of colorful characters and props, making way for future shows such as “Sesame Street” and others.

1950: First cartoon on TV – While animated feature films were not unusual by the late 1930s and 1940s, it would take several years for a fully-fledged animated TV show to make it on air. “Crusader Rabbit” was the first of its kind, featuring an adventurous rabbit in several stories that satirized movie serials. One of the show’s producers, Jay Ward, would go on to create “The Rocky and Bullwinkle Show.”

1951: First talk show – Radio broadcaster Joe Franklin became the host of the first televised talk show, simply named “The Joe Franklin Show.” Lasting until 1993, the show is one of the longest uninterrupted runs, starting as a daytime talk show and moving to late-night.

1951: First show filmed for a live studio audience – “I Love Lucy” brought a number of famous TV firsts, among them the distinction of being the first show to be filmed in 35mm in front of a live studio audience. What made this show’s approach groundbreaking was the use of a multi-camera format, which became common use in the decades to follow.

1953: First pregnancy and birth storyline – When “I Love Lucy” star Lucille Ball became pregnant in real life, the trailblazing show that she headlined wrote it into the show’s storyline. Almost 72% of homes with television sets tuned in to watch the debut of baby “Little Ricky,” creating a major rating bonanza. With the word “pregnancy” still taboo on television, Lucy was referred to as “expecting.”

1956: First reality TV show – The public fascination with reality television and big prizes can likely be traced back to “Queen for a Day.” Originating as a radio program, “Queen for a Day” had the host, Jack Bailey, ask individual women about their financial hardships and struggles, gaining sympathy with the audience. The winner, based on applause, would be seated on a throne and awarded gifts.

1960: First televised presidential debate – Televised presidential debates are the norm  today, but it wasn’t standard until the 1960 election between Sen. John F. Kennedy and Vice President Richard Nixon. Television audiences who watched the Kennedy/Nixon debate recalled the confident and attractive Kennedy on the television screen while Nixon came across as nervous and sweaty. Conversely, listeners on the radio believed that Nixon won the debate

1960: First animated show for prime time – Televised animation was considered to be a kids only genre, but “The Flintstones” challenged preconceptions when it became the first animated show to hold a prime time slot. Produced by Hanna-Barbera, the show had a standard sitcom structure, while featuring the high-concept juxtaposition of modern everyday problems with a Stone Age setting.

These are just a few of the firsts in television, but there are plenty more to check out that came after 1960 and some before. here is the link to the entire list:  https://www.msn.com/en-us/tv/gallery/50-famous-firsts-from-tv-history/ss-BBZRhQ6#image=1 Some will surprise you, enjoy.

HOW ALL 32 NFL TEAMS GOT THEIR NAMES