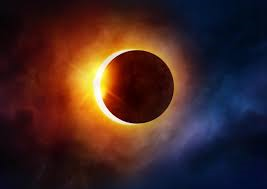 As many as 100 million people will watch the solar eclipse on Monday August 21, making it an era-defining event. Aside from a 1999 eclipse that went through Europe, this is the highest concentration of people that have ever been touched by a total eclipse!

The path of the eclipse will start in Oregon at 9:05am PT and finish in South Carolina at 4:10pm ET. The total eclipse exact path will go through Oregon, Idaho, Wyoming, Nebraska, Kansas, Missouri, Illinois, Kentucky, Tennessee, Georgia, North Carolina and South Carolina. It will still be seen in other states but this is the exact path. Over two million people are expected to travel down Interstate 95, which stretches from New England to Florida during the eclipse!

The sun is 400 times larger than the moon — but it’s also 400 times further away. So when the Moon’s orbit takes it across the ecliptic — the apparent path of the sun through the sky — it can fit across it exactly. The Moon’s shadow will race across the USA at 1,462 – 2,955mph and totality will last for 2 minutes 41 seconds at the Greatest Point of Duration. That occurs near Carbondale, Illinois, most other observers will still get over two minutes of totality.

When you watch a total solar eclipse, you’re watching our corner of the solar system in perfect alignment, right in front of your eyes. It’s a celestial phenomenon called syzygy. It may be tricky to say, but it’s not a difficult concept to understand. “Syzygy is when the Earth, moon and sun line-up,” said NASA Ambassador Eddie Mahoney. ”It will be possible to gaze at planets and stars during the day on August 21. Most obvious during totality will be bright planet Venus on the right of the sun and moon, though Jupiter may also be visible on the far left. Mars and Mercury are also close to the eclipse, though they may be hard to see with the naked eye”, he added.

There will be numerous parties, events and specials in association with the eclipse. Denny’s Restaurants will feature All You Can Eat Moon Cakes for $4 (yes, they are just pancakes) … Eight minor league baseball stadiums will have eclipse watching parties starting at 9am in Oregon … observatories, museums and civic centers have events and there are many festivals scheduled from coast-to-coast.

Make sure you do not look directly at the sun during the eclipse as severe damage to your eyes may occur. Wear protective glasses. Another Total Solar Eclipse will sweep through the U.S. on April 8, 2024.