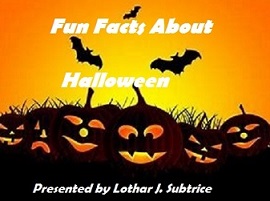 Well it is almost time for the ghosts, goblins and many kinds of creatures to make their yearly appearance at Halloween. This year we have our own to host this Halloween edition of “Shit We Should Know”, welcome to the one and only, Lothar J. Subtrice.

The first Jack-o-Lanterns were carved from turnips. It wasn’t until the tradition came to America that pumpkins replaced turnips.

On average, kids who trick or treat will bring home a bag of candies worth 11,000 calories.

In Alabama, wearing a nun or priest costume for Halloween is illegal. violators may be charged a $500 fine as well as a year in prison.

Walnut Creek, California prohibits Halloween masks without permits. Although masks are pretty much a standard for Halloween, you’d need to secure permits before donning one. The Walnut Creek authorities strictly implement this law to prevent criminal activity during Halloween celebrations

Michael Myers’ mask came from an altered Captain Kirk Star Trek mask.In an interview with Willam Shatner, he revealed that the Michael Myers mask used in the film was a prop that was formerly a Captain Kirk mask, Halloween‘s production crew painted it white for the killer’s iconic visage.

Each year, Americans spend around $86.79 for Halloween related goods. According to the National Retail Federation, the United States spends an average of $9 billion on Halloween related items and activities. In 2018, over 175 million Americans were expected to partake in Halloween events and celebrations throughout the fifty states.

Reese’s cups rank as one of the highest-selling candies during Halloween. In 2019, Monmouth University conducted a study to rank the most popular Halloween candies in the United States. In the survey, 36% of participants favored Reese’s peanut butter cups over all other Halloween candies.

Candy corn was originally named Chicken Feed due to its shape and color. First produced in 1888 by Wunderle Candy Company, this famous confectionery used to be known as Chicken Feed.