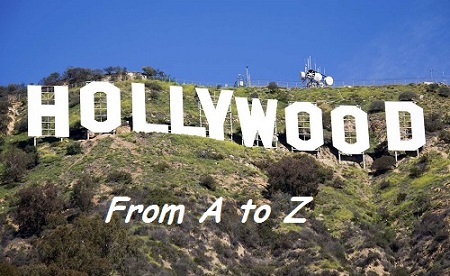 From A to Z here are some interesting trivia facts about Hollywood, the movies, the actors, actresses, TV shows and more.

A – All in the Family – When the show was first put together Carroll O’Connor was not the choice for the role of Archie Bunker, because he played tough guys in the movies. The original choice was Mickey Rooney who turned it down not wanting to portray a bigot. O’Connor wound up getting the role.

B – Lucille Ball – First, that was her real birth name. She was a brunette but when technicolor came she dyed her hair red for a better look. She starred in the hit radio show “My Favorite Husband” for CBS in 1948. She moved the show to television with the title “I Love Lucy” and became the first female to head a TV studio when she and husband Desi Arnaz formed Desilu Productions.

C – Casablanca – Thanks to Hollywood magic of various camera angles, chairs of different sizes and boxes out of camera range to stand on, the height difference between Bogart and Bergman was well hidden. Bogart was only 5’ 9 while Bergman was almost 6 foot tall.

D – Walt Disney – When Disney was an aspiring artist and cartoonist he was trying to come up with a fun character. From the time he was a child he had a fear of mice. Disney thought if he did one as a cartoon he would get over his fear. Because of that the iconic Mickey Mouse was born.

E –  Buddy Ebsen – He was the original Tin Man in  the “Wizard of Oz”. The aluminum dust used in the makeup caused a severe allergic reaction. Ebsen was hospitalized and Jack Haley took the part. Ebsen recovered and years later starred in the “Beverly Hillbillies” TV show.

F – Forrest Gump –  Before Tom Hanks took the role of Forrest Gump it was offered to John Travolta who turned it down. The role of Jenny, Forrest’s girlfriend was offered to, and turned down by, Jodie Foster, Demi Moore and Nicole Kidman before Robin Wright got the part.

G – Godfather, The – When Francis Ford Coppola was casting the film he wanted Marlon Brando for the Don Corleone role, but Paramount wanted Ernest Borgnine. Paramount also had Danny Thomas in line for the role. Coppola insisted on Brando and the studio agreed only if he would work for less money.

H – Rita Hayworth – One of Hollywood’s most glamorous actresses, she was the #2 pinup of soldiers in WW II behind Betty Grable. She was also the first actress to become a Princess when she married Prince Aly Khan in 1949. She also championed the cause for Alzheimer’s from which she died in 1987.

I – Irene Ryan – Everyone associates Ms. Ryan with her iconic role as Granny on the Beverly Hillbillies. However, not only was she a very good actress, but she was also a gifted singer and performer on Broadway and was nominated for a Tony Award in 1973 for her starring role in the musical “Pippin”.

J – Jaws – There were three mechanical sharks used in the film and all of them malfunctioned many times causing big filming delay. There was one for shots on the left, one for shots on the right and one for full length shots. The cost to build all three was $225,000, which is about $1.4 million today.

K – Nicole Kidman – The tall (5’ 11”) Australian actress was born in Hawaii but raised in Sydney. She made American acting debut in 1990  in Days of Thunder. Since then she has done every type film drama, comedy, musical and is the first Australian actress to win an Oscar.

L – Love Story – This film has become one of the most revered in Hollywood history. There is a scene in the beginning of the film where Oliver’s roommates razz him about his new girlfriend. One of thee poker players in this scene was an unknown young actor who would go on to become an Oscar winning star. His name is Tommy Lee Jones.

M – Steve McQueen – Most everyone knows that McQueen did his own driving stunts in his movies, but he was also the inventor of the bucket seat. The seats in the cars he drove in movie scenes were very uncomfortable, so he designed and invented the bucket seat and the rest, as they say, is history.

N –NYPD Blue – One of the most popular TV shows of the 1990’s. The exterior of the fictional 15th Precinct station on NYPD Blue is the same building that was used as the station house on Kojak. Also many of the street sets used in the show  shot on the 20th Century back lot were built for the 1960s Barbra Streisand musical “Hello, Dolly”.

O – Ryan O’ Neal –  Before acting he was a Golden Gloves boxer for a couple of years and wound up with an 18-4 record. He worked as a stuntman on the TV show “Tales of the Vikings” but his breakout came in the TV soap opera Peyton Place. His film debut was in 1970 playing Oliver in “Love Story”.

P – Psycho – This  is one of the classic Alfred Hitchcock films of all time Shot entirely in black and white the special effects people came up with clever ideas to replace color. One of them was using chocolate syrup for the blood in the famous shower scene with Janet Leigh.

Q – Quincy M.E. – He was played by Jack Klugman, later “The Odd Couple” and during the entire run of the show Quincy’s first name is never mentioned. Even in the final season when he gets married there is still no mention of a first name. All the viewers heard was the minister saying, “Do you, Quincy, take this woman . . .”

R – Jane Russell – The busty, statuesque brunette became a star with the controversial Howard Hughes movie “The Outlaw” and then later “Gentlemen Prefer Blondes” with Marilyn Monroe and other hit films. Prior to becoming an actress Ms. Russell was a singer with the big band of Kay Kyser.

S – Star Trek – In the original TV pilot Majel Barrett, who would later marry creator Gene Roddenberry, was Kirk’s First Officer, but a woman in the role did not play well. Once the series was a regular on the network and cast changes were made, Barrett appeared in many episodes as nurse Christine Chapel who had a romantic interest in Mr. Spock.

T – Three Stooges – One of the greatest comic trios of all time, Moe. Larry and Curly began in different paths. Moe was an accomplished Shakespearean actor, Larry was a trained classical violinist and pianist and Curly was an accomplished dancer before they all joined together to form the Stooges and make millions for Columbia Pictures, of which they saw very little in return..

U – Untouchables, The – Director Brian de Palma talked to actor Bob Hoskins to play Al Capone in the film because Robert De Niro wasn’t sure he wanted to do it. Hoskins said yes, but when De Niro finally said yes, the studio paid Hoskins $15,000 for his time. Critic Roger Ebert was not kind to De Niro in the review of his Capone portrayal.

V – Dick Van Dyke – He and his first wife, Margie Willett, married on-air courtesy of the radio show Bride and Groom, which paid for the rings, honeymoon and household appliances. While he starred on Broadway in “Bye Bye Birdie” the producers of a new TV show had narrowed the choice down to Van Dyke and Johnny Carson, Van Dyke won and the “Dick Van Dyke Show” sitcom was born.

W – Wizard of Oz – The film came out in 1939 and was actually a flop at the box office. 35 years later, in 1974 Judy Garland’s daughter Liza Minelli married Jack Haley Jr., the son of of Jack Haley who played the Tin Man opposite Judy in the “Wizard of Oz”. The couple divorced in 1979.

X – X- Files – When the show first aired it was predicted to last less than six episodes. Of course it went on to becoming a sci-fi hit. Gillian Anderson as Scully, did a lot of scenes standing on a box because she was so much shorter (by 7 inches) than Mulder. Before David Duchovny got the Mulder role both Dean Cain and Lou Diamond Phillips were considered.

Y – Young Frankenstein – One of the great Mel Brooks films of all time, Brooks located the original laboratory and electrical effects from the original Frankenstein and used them in his film. Marty Feldman, who played Igor, made the line “walk this way” so hilarious that Steven Tyler of Aerosmith wrote the song “Walk This Way” which became a rock classic.

Z – Zeppo Marx – He was one of the famous Marx brothers appearing in their stage, movie and vaudeville acts for many years. What is little known is Zeppo was also an inventor. Among his inventions that he obtained several patents for, was a wristwatch that monitored the pulse rate of cardiac patients and gave off an alarm if the heartbeat became irregular.

And there you have “Hollywood A – Z”.