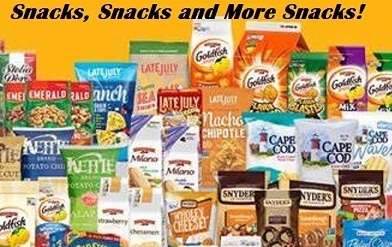 When it comes to food, snacks are a big part of daily life. Aside from breakfast, lunch and dinner, we all have our favorite snacks to munch on. Whether we are watching a movie, a sporting event, working around the house or whatever, always having snacks handy is as natural as breathing. With that in mind, here are some of your favorite snack companies and you may be surprised at how long they have actually been around supplying people of all ages with these goodies.

Pepperidge Farm – It was started in 1937 in Fairfield, Conn. By Margaret Rudkin. At first the company only made and sold bread. After a trip to Europe in the 50’s she decided to expand to cookies and the brand  became even more successful. Campbell’s bought the company in 1961. Today there are a number of items including the popular Goldfish crackers and Milano cookies.

Frito-Lay –  The company began in 19 32 when Charles Doolin bought a corn chip recipe, a potato ricer and 19 retail accounts from a corn chip manufacturer for the grand sum of $100. For a while besides the chips, the company also sold peanuts and peanut butter sandwiches. In 1945 they teamed up with the H.W. lay Co., makers of potato chips to become Frito – Lay.

Wise Potato Chips – It all began in 1921 by Earl Wise Sr. in Berwick, Pa. There was another popular brand from Pennsylvania as well at the time, Utz, which is also still around. Wise would go on to add a variety of flavors to their chips over the years and become one of the top brands. In 2012 the company was bought by Arca Continental. (Wise has always been my favorite because of one flavor no other company has, Onion-Garlic, yummy!)

Mars Inc. – The company was originally founded by Frank C. Mars in 1911 and was doing well. However it was his son Forrest who really made the company a household name with his candy inventions of the Milky Way bar, Mars Bar, Snickers, Twix, M &M’s and others. In addition to all the different candies, Forrest Mars also started Uncle Ben’s Rice as well.

Snyder’s of Hanover – This longtime maker of pretzels was begun back in 1909.  Harry Warehime had a small bakery in Hanover, Pa. and developed their various pretzel snacks from there. Eventually the Snyder name became the most popular with pretzel lovers with all their varieties. In 2010, the Snyder company merged with Lance to become Snyder’s-Lance and offer up an even wider variety of snack foods.

Planters Peanuts – The company began back in 1906 and has travelled a number of corporate roads a long the way. It was begun by Mario Peruzzi and Amedeo Obici. The started with only six employees, two roasters and crude outdated machinery, but it worked and Planter’s would become a huge name. So much so that Standard Brands bought the company in 1960, merged with Nabisco in 1981 and then was acquired by Kraft Foods in 2000. Kraft is now Mondelez International.

Blue Bell – It began as the Brenham Creamery Compnay in 1907 in Texas. It sold mostly cream and related milk products. Ice cream didn’t come along until 1911 and was an immediate hit. But in 1919 after WWI the company y almost went out of business, but managed to survive and ice cream sales picked up reaching new highs. In 1930 the company officially changed its name to Blue Bell  that was inspired by the Texas Bluebell wildflower.

Cracker Jack – The name was first put to use in 1896 when Louis Ruckheim discovered a method to separate the kernels of molasses coated popcorn during manufacturing. Once this method proved successful the company came up with a name and design and the new snack became instantly popular, especially and baseball parks. Then they added the little prizes hidden in each box and that really made Cracker Jack one of the most popular snack foods everywhere.

Keebler – This is one of the oldest snack companies in the U.S. it dates all the way back to 1853 when Godfrey Keebler opened his bakery in Philadelphia. He became successful with his various cookies and crackers. Keebler and other bakeries all got together to form the United Biscuit Company and gained a national reputation. In 1936 Keebler became the official baker of Girl Scout cookies, which they still are today through one of their subsidiaries, Little Brownie Bakers. Today the company is part of Kellog’s.

Lay’s Potato Chips – In 1932 Herman Lay opened a snack food  company in Nashville, Tennessee. In 1938 he purchased a failing potato chip company in Atlanta and expanded his business. After the end of WW II Lay’s company began to expand and gain more big name grocers to sell his product. He was also the first snack food company to buy commercial time on television in the late 1940’s.  It merged with Frito’s to become Frito – Lay. Today there are dozens of flavors, kettle cooked and Lays Stax, a competitor to Pringles.

There you have just ten of the top snack food companies operating today. There are many more and you find the entire list and info by going to: https://www.msn.com/en-us/foodanddrink/foodnews/you-wont-believe-how-old-these-snack-food-companies-are/ss-BB19RTL2?ocid=U506DHP&li=BBnb7Kz#image=21  you will come across some interesting facts. Enjoy your snacks!

50 Things You Can Do with Coca Cola

What Is Our Real Name?

Every Day This Week is a National Food Day!