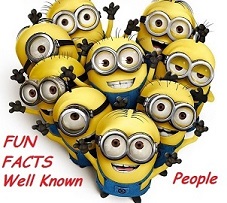 It’s always fun to find out things about popular people, celebrities, sports stars, etc. that we didn’t know. There are some very interesting, fun and informative stories here that many people may not even know about. Here are a few we think you will enjoy and even be surprised by.

It is amazing to think of these different celebrities that we all know from movies, TV, recordings, concerts, etc. but rarely are aware of their none celebrity side. There are a number of other celebs besides the ones we highlighted, who are inventors, creators, etc., so maybe we’ll do a part two in the future. Hope you have enjoyed this and will share it with others.

Some Fun Facts to Know!