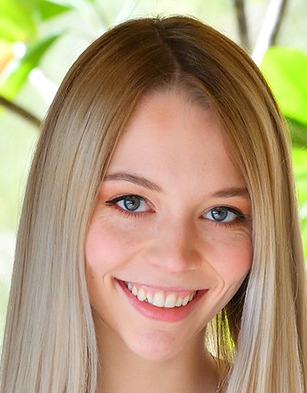 This week we have another of the newer up and coming faces in porn that you will be seeing more and more of. A native of the Steel City, this blue eyed blonde has only been in the industry a little more than a year. In a short period of time this sexy girl has made folks sit up and take notice with her steamy scenes and there are a lot more on the way. With the industry pretty much back to normal 2022 is going to be a breakout year for this talented young lady. Her name is Lily Larimar.

Lily entered the world on June 30, 1998 in Pittsburgh, Pennsylvania.  She grew up in the Pittsburgh  area, attended schools there and was blessed to have a very supportive family life growing up. After school was finished she got a job working at Victoria’s Secret in a variety of positions. It was a nice way to earn money, but Lily wanted more.

She always had a sexual nature, lost her virginity in high school and working for VS seemed natural. Aside from being a sales associate, she also had the task of being a decorator setting up the displays for holidays, etc. But Lily was after more than just a job selling lingerie. So she started doing some web cam work independently in 2018.

In 2019 with her webcam appearances gaining some steam, she decided to pick up and move out to L.A. She had always wanted to live in a warmer climate be close to beaches and this gave her that opportunity. She also knew that she could continue doing webcam shows in a much better atmosphere with a chance of expanding her career.

The move to L.A. also got this all natural blonde closer to the adult industry. As her popularity grew on the web it was time to move forward so Lily contacted Motley Models about getting into doing films. They wasted no time getting back with here and in the beginning of 2020 she signed on with them and it has been a great move for both.

Since then Lily has been kept very busy not only doing web shows for various outfits, but expanding into doing films. It is also good to know that Lily never hid anything from her folks about her career plans and they have been very supportive of her moves which gives Lily a big boost of confidence to have that support.

Film wise, Lily has done scenes for the likes of Erotica X, Sweetheart Video, Hustler, Zero Tolerance, Girlfriends Films, and others. This sexy blue eyed blonde can do it all with the guys or the gals and she really gets into it. Check her out in  “Coming of Age 7” for Erotica X, “Cheer Squad Sleepovers 36” for Girlfriends Films, “Tell Her” for Deeper.com., “Mystery Crush” for Web Young and the very recent “Deranged” for Wicked Pictures”. This young lady will make you a fan.

Now that the industry is  back to normal, you will be seeing a lot more from this extremely talented, enthusiastic and eye catching dynamo. She has all the qualities to be an award winner and should go very far in the industry. Aside from looks and body, she has personality, charm and ever improving acting skills that will carry her even further with a bigger and brighter future in adult for her. I am very pleased to present Lily Larimar as my “Girl of the Week” here on AAN.