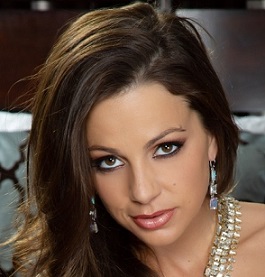 This week we present a lady who has been on the scene for several years. She comes from the land of crab cakes and Orioles, has won several awards and continues to mesmerize audiences with her sizzling scenes. Still, there is a lot more on the horizon for this sexy brunette. Her name is Abigail Mac.

She created her own scenes and started to gain an audience who enjoyed her shows. From there it was taking it to the next step and that was adult films. She got an offer to come to L.A. to do a shoot so she took up the offer.When she first began Abigail would only do girl/girl scenes, but they were very hot and got her very quick notice along with award nominations.

That was back in 2012-2013, but then things began to change as Abigail got into doing boy/girl scenes and that’s when things would really take off for her. As good as she was with women, her skills with a guy were incredible and the industry had a true budding star in their grasp. But that was only the tip of the iceberg as Abigail had more she wanted to try.

Since she arrived this 5’ 2” firecracker has done over 500 web and film scenes for some of the top companies such as Girlfriends Films, Wicked Pictures, Jules Jordan, Blacked, Penthouse, Elegant Angel and a host of others. If you want to see what this amazing lady is capable of then check out the  award winning, “Abigail” from Tushy, and the just released “Lola and Maxie Get Off” for Adam & Eve Pictures. Hot, hot, hot!

Even though she has been on the scene for a few years won several awards from AVN and XBIZ, there is still a lot more to come from this fiery, talented lady. Watch for some directing, more meaty acting roles and of course, off the chain sexual action. She has it all and then some. I am pleased to have Abigail Mac as my “Girl of the Week” here on AAN.

Girl of the Week – Dakota Skye