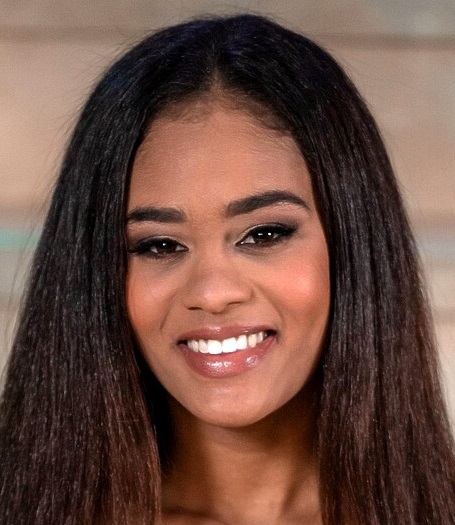 Girl of the Week – Scarlit Scandal

This tiny, petite lass was born on April 27, 1999 in Fort Pierce, Florida. She grew up in Florida and was a top flight student in school. She was also a very talented member of the track team as well. Being a mix of African-American and Latin is the reason for that great sultry and exotic look that Scarlit possesses. She has a smile that just takes you in and very expressive that tell quite a story.

She admits that at a young age she began to follow several adult models on Twitter. Scarlit was by now intrigued by the performers and the adult industry in general, So she went about e-mailing some of the adult agencies to see how she could go about starting a career in the adult industry as a performer. This young lady didn’t have to wait very long.

The folks at Motley felt she had “it” and was something special. She made her debut in March 2019  doing scene with Rob Piper for Mike Quasar’s Diabolic Video release “Booty Jackin’ #7”. From there everything just began to pick up for this talented young lady with a number of steamy web scenes. Then films came along to give Scarlit a chance to show off her acting talents as well.

After that March debut she was doing web scenes for outfits like realitykings. Com, teamskeet, brazzers.dom, adult time. Com and many others. As for films she was seen in features for Bellasa Films, girlfriends Films, Blacked, Deeper.com, new Sensations and more. The new year of 2020 looked like it was going to be her real breakout, and then along came the COVID-19 pandemic.

But fear not, Scarlit took a short hiatus like everyone else, but had done some scenes prior to the shutdown. Now that the industry is beginning to slowly come back, she is also back turning out some hot scenes. Here are a few to check out. There is “Obsessed” from Sweet Sinner, “Sensual Moments 8” for Erotica X, “Swallowed 40” for Evil Angel that are among the most recent.

Now that the industry is beginning to return to some kind of normal with shooting new scenes and films, this young lady will pick right up where she left off. She has all the qualities needed to be a star, temperament, desire, professionalism, beauty, talent and a pure drive to be the best. I am eager to see what she has coming our way and you should be also. I am very pleased to introduce Scarlit Scandal  as my “Girl of the Week” here on AAN.