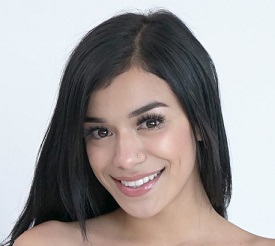 Once again we are pleased to bring you another of the new faces in adult films. This black haired vixen with an amazing all natural body has only been doing movies since the spring of 2019. In that short time she is fast making a name for herself with her steamy performances in some top flight productions. Her name is Savannah Sixx.

This young beauty came into the world on June 23. 1999 in Hollister, California which is in the northern part of the state near San Jose. She led a fairly normal life growing up and in school was pretty much a loner and kept to herself and didn’t date. Savannah says she didn’t belong to any clubs or do extracurricular stuff and just wanted to get through school and move on.

That was early 2019 and they set Savannah up to do her first hardcore sex scenes. As for her family, some are aware of what she does and some don ‘t. But those that do are very supportive and for that she is thankful because she is very happy doing what she does for a living. While it’s not easy to get people to understand why, those that are supportive make it all a much more pleasant life for this young lady.

If you have not had the pleasure of seeing this young, new talent in action you  are missing out. Here are a few to check Savannah out in, not only for the sex, but also her natural ability as an actress. There is “Dirty Little mermaids” for Penthouse, “Women Seeking Women 169” for Girlfriends and the recent, award nominated “Love Emergency” for Adam & Eve Pictures.

She has accomplished a lot in less than a year, but the best is yet to come. Her fan base continues to grow, her performances sizzle, the bigger roles and award nominations are in the future and her star is most definitely on the rise. I am very pleased to introduce you to Savannah Sixx my “Girl of the Week” here on AAN.

Girl of the Week – Liv Wild

Girl of the Week – Little Caprice