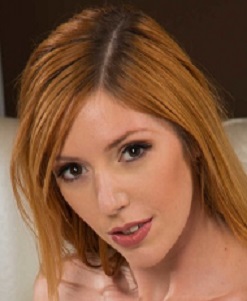 This sparkling, sexy redhead has become one of adult’s top stars, won numerous awards and just keeps getting hotter and better. But even during the industry shutdown due to the COVID-19 pandemic, she has kept very busy for her fans. She is also a nominee in the Best Female Performer category for our upcoming NightMoves Adult Awards. At the end of this feature will be the link where you can vote for her. Right now let me re-introduce Lauren Phillips.

Lauren was born on Dec. 8, 1987 and raised in Atlantic City, the well known New Jersey resort town. Those dazzling looks are the result of her heritage being a mix of Dutch, English, German, Irish and Scottish. During her younger years Lauren took up dance and was very serious about a career in that field. Fact is she attended Rutgers University as a dance major and was a legit professional dancer for about eight years.

She had also worked as a nanny as well as a dancer, but there was something lacking in her life. With her dance background and incredible flexibility, she discovered the adult industry through performing as a webcam model. She was also a very sexual person so it seemed like the adult industry would be a good fit and it has been nothing but ever since and we are blessed by her presence.

So Lauren packed up everything and moved down to Tampa, Florida. Once she got there she became friends with adult stars like Charlee Chase, Carmen Valentina, Vicky Vette and joined VNA Network which is run by Vicky Vette. Ms. Phillips became a popular attraction on the site with her insatiable appetite for sex. In 201 3 she filmed her very first hardcore scene for Miami based Reality Kings

With her flaming red hair, being a tall 5’ 10” with a dazzling smile those ample breasts and come hither eyes, Lauren makes quite a picture when she enters a room. That certainly comes through loud and clear in her varied scenes. Once she got that first scene done in 2013, thing really began to move into high gear with  both web appearances and films. But it was 2016 when things really  began to happen fast and furious and set Lauren on the road to major success.

At our 25th Annual NightMoves Adult Award Show in 2017 Lauren came away with the Best Adult Performer Website award for her  http://LaurenPhillips.com. site and it was very well deserved. She is a very busy young lady these days and loves pleasing and interacting with her fans. Lauren has gone on to do more films, web appearances, dance gigs in top clubs, won several more awards and also incorporated herself. She has become a very astute businesswoman in the process  and is constantly promoting herself on all forms of media.

In addition to all the films the pandemic has not slowed her down. she has appeared on Exxxotica.tv. In addition, she has appeared on a variety of podcasts and continues to keep her fans very happy with her appearances. We cannot wait for the industry to reopen because we know Lauren will be a huge part of its future. She is a total pro and an extremely talented performer. In the mean time please go to www.NightMovesxxx.com! where you can vote for Lauren and all your favorites. I am very pleased to bring back Lauren Phillips as our “Girl of the Week” here on AAN.

Girl of the Week – Khloe Kapri

GIRL OF THE WEEK – Jillian Janson

Girl of the Week – Brooklyn Gray