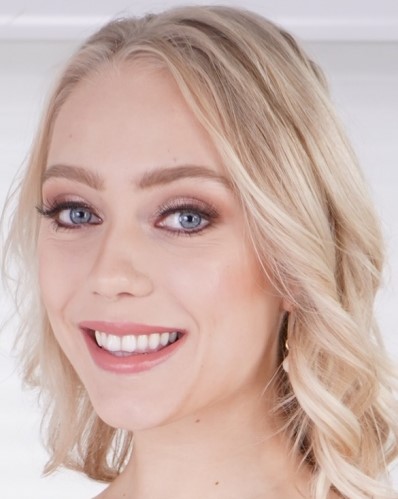 This week we introduce you to a young up and coming starlet with personality and tons of talent. She has only been in the business a short time but she is making news fans every day and making people take notice. She is also a nominee for our upcoming NightMoves Awards for Best New Starlet. At the end of this feature will be the link where you can vote for her. Her name is Braylin Bailey.

This petite little blonde came into this world on May 18, 2000 in northern California. She grew up and went to school in the area and did well. She wasn’t a nerd, but Braylin was very smart got very good grades and took honor classes and advanced classes as well. She had no clear cut idea what was ahead after she graduated.

That debut was for Net Video Girls and went so well, another one followed. The fan reaction was great and Braylin was on her way. A series of web scenes followed for a number of companies including Bang bros., WankzVR, Tiny4K and others. Each time her fan base continued to grow so the next step was doing films, learning dialogue and steadily improving her skills as an actress.

She was definitely getting noticed and with each film, her variety of talents continued to get better and hotter. Braylin found herself working not just for web outfits now, but for well known companies like Girlfriends Films, New Sensations, Digital Sin, Hard X, Sweetheart Video and more.

If you have not gotten a chance to see this vivacious blue eye blonde in action then check out these for a start. There is “Cheer Squad Sleepovers 38” for Girlfriends Films, “Cute Little Babysitter 11” for New Sensations, “Massage Seductions” for Sweetheart Video, and the brand new “Super Cute 14” for Hard X, all guaranteed to make you an instant fan.

She has come a long way in a short time and the best is yet to come for this delightful, talented young lady. She has all the right moves, the personality and talent to go very far with a growing fan base. There is a reason why she is a nominee for Best New Starlet at our upcoming NightMoves Awards, so go to this link: https://nightmovesonline.com/vote-now/ and cast your votes for her now. I am very pleased to introduce you to Braylin Bailey, my “Girl of the Week” here on AAN.