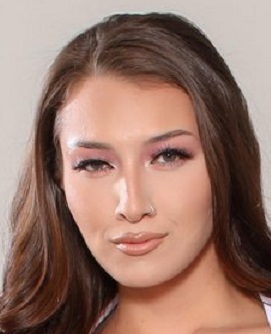 This eye catching brunette has been on the scene since mid 2019 and was on her way up the ladder when the pandemic struck and knocked the industry out for some time. But she found ways through web shows and and appearances to continue building up her fan base. Now that the industry is back so is this talented beauty. She is a tall, vivacious California girl who is making some big strides once again. Her name is Bella Rolland.

This beauty  was born July 11, 1994 in Sacramento, California. She had a pretty normal upbringing and did quite well in school. Bella says that she was a much more shyer person in school than she is today. Being the athletic type, she was active in school sports being an active member of the wrestling team, although she admits she was not that good.

With that all natural body, a 36C rack, long brown (sometimes blonde hair), telling hazel eyes and a smile that lights up a room, she is a vision. Her boyfriend at the time felt that vision needed to be seen. So he encouraged her to do some Snapchat photos. Bella did and the reaction was immediate. So she began to dabble in doing some webcam as well and that became the catalyst.

If you have not seen this beauty in action as yet you are in for a major treat. Thankfully a few of her recent releases before the pandemic hit are readily available like Wicked Pictures “Swipe Right”. In addition there is, “Tushy Raw V21” for Tushy, “Twisted Passions 28” for Girlfriends Films, and recently “Nymphos.com 24” for Evil Angel and “Consumed By Desire 2” for Bellesa Films. This give you plenty of variety to enjoy Bella in.

Tall, talented and tempting in so many ways and we eagerly look forward to seeing Bella much more now that the industry is back  pretty much to normal. She has much to offer and a very bright future with plenty of different projects to jump into.  She is definitely one of the true newer bright lights in adult films. I am very pleased to be able to feature Bella Rolland as my “Girl of the Week” here on AAN.