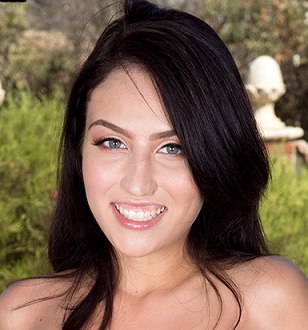 This week we have the pleasure of introducing you to another of the newer faces and performers in adult. She came in to adult films in 2018 and with her black hair, green eyes and a melt your heart smile she has burst on the scene with some scorching performances and award nominations. Her name is Jade Baker.

She was born in Miami, Florida on May 13, 1997. Her Cuban heritage accounts for the sultry looks and a well toned all natural body. Jade spent her school and growing up years in Miami and was a good student. When she graduated high school she packed up and headed west for Denver, Colorado where she was taking classes in fashion marketing.

In 2017 Jade decided to do some webcam modeling for extra money on MyFreeCams and was doing well. She was also dancing at a local Denver club in addition to going to college. Needless to say Jade was not one to slow down and take things easy, plus she enjoyed what she was doing and bringing pleasure to people. But all this work with the cam shows and dancing paid off.

It was in the summer of 2018 when Jade made her adult film debut for Girlsway. The sultry long haired beauty is strictly a girl/girl, solo performer, but while she has not done guys in her films it hasn’t hurt her popularity which continues to grow with each new scene and release. That popularity is not just with women but also coming from men and couples.

Jade is very mindful of her fans and loves the contact and connection she has with them. When she isn ‘t busy working on a production she always makes sure to have some hot, live cam shows to entertain the fans. One of the ways they can do that is they can go and discover jade’s sauciest social media updates via her official FanCentro profile.

If you have not had the pleasure of seeing this very sexy, sultry, sensual young lady perform we have a few suggestions for you. Check Jade out in “Lesbian Christmas Story” for Sweetheart Video, “Mother-Daughter Exchange Club 57” for Girlfriends Films and the brand new “Holy Matri-moly!” from Girlsway. (which we just reviewed.)

She was Girlsway’s Girl of the Month in December and she has been nominated for several awards but that is just the beginning. Aside from her all natural, athletic body and super good looks, she is also a competent actress. There are many good things ahead for her in the new year. I am very pleased to present Jade Baker as my “Girl of the Week” here on AAN.

Girl of the Week – Lana Sharapova