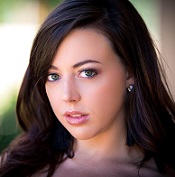 With the COVID-19 pandemic still gripping our lives and shutting down the industry, I decided to bring back a young lady I first introduced you to back in mid 2018. Since that time she has really emerged as a true star going on to many big, new and exciting things.  Hopefully the industry will be back soon and she will pick up where she left off. Her name is Whitney Wright.

This young lady is a Virgo born on September 20, 1991 in Oklahoma. Whitney was raised in a Christian family in a small country town. She attended a private Christian school from kindergarten through high school. After graduating she  enrolled in a nursing program and had taken all the prerequisite courses.  And soon we would have nurse Whitney on the medical scene.

However, it’s funny how sometimes things can change when you least expect it. One night she was out with some friends and really as a joke and to just have some fun Whitney began dancing onstage at a strip club. After that impromptu performance the club manager had taken notice. He then asked Whitney if she’d like a job at the club as a dancer. Without hesitation  she took him up on his offer and just like that her career direction took an abrupt turn.

That was only the beginning for this sensuous black haired beauty who displayed  a natural talent on stage as a dancer. Whitney  then became quite proficient at pole dancing and aerial silk dancing, neither of them easy to perfect. Realizing she was good at dancing and having discovered sex in her teens,Whitney decided it might be time to look into the film side of adult entertainment.

Now, at the age of twenty five after dancing and having a couple relationships, Whitney made the move into doing adult films in 2017. Today with more than 400 scenes to her credit it has been a great career move for her and a fan base that continues to grow by leaps and bounds. Whitney has covered just about all the bases when it comes to her roles and the sexual genres she has taken part in. Boy/girl,  girl/girl, threesomes, interracial, group, drama, comedy, you name it and she has done it.

When this steamy lady with the sparkling eyes did her first scene she took to the business very easily, professionally and showing a lot of talent. It didn’t take long before she was turning out scenes for some of the big companies like Evil Angel, Digital Sin, Wicked Pictures, Girlfriends Films, Adult Time, Pure Taboo and more. In addition there are web scenes for Naughty America, Holed.com and on the Adult Time platforms among many others.

Since that beginning Whitney has gone on to be nominated and win a number of awards in various categories from all the major award organizations in the adult industry. In addition she also has shown her talents as a director also gaining her award nominations, She has become a true triple threat in the industry as a performer, writer and director.  Her latest release before the shutdown will provide all you need to see and enjoy about this seductive beauty. Check out the “Best of Whitney Wright” on Adult Time.

With all her award nominations and wins from XBIZ, AVN and NightMoves she was definitely moving into the superstar ranks in adult. All we can hope for now is that when we get past this pandemic and the industry opens back up Ms. Wright will pick right up where she left off. She is truly a multi talented and gifted young lady we cannot wait to see performing again. I am very pleased to reintroduce you to Whitney Wright as my “Girl of the Week” here on AAN.