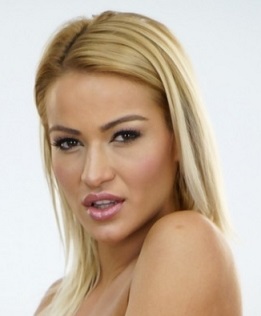 Girl of the Week – Cherry Kiss

This week we introduce you to a young lady who has become an international adult star. Coming from Europe, she has been quickly gaining a foothold with fans here in the states. She is a dynamic performer with quite a list of credits to her name. Meet the very sexy Cherry Kiss.

This take your breath away blonde was born on New Year’s Eve, December 31, 1992 in Nis, Serbia. She comes from a very conservative family and spent most all her childhood growing up and attending school in the area. But after school she wanted to advance her life away from the small country way. So she moved to the bigger, more progressive city of Belgrade.

Cherry’s entry into the adult industry didn’t come right away. She had moved to Belgrade and was attending school taking medical studies with eye towards that field. She also began working as a makeup artist and was doing well. That was when a friend who was part of the adult industry approached her, not about performing, but doing makeup on an adult film set.

Then in 2012 she appeared on a reality TV series in Belgrade called “Parovi”. Because they used her real name, people she knew, family, friends all got to see the real person she was. Naturally it caused a big stir, name calling, etc. but she also became a very popular personality and her fan base just continued to grow. She also continued to do more adult films.

From 2013 to 2016 Cherry stepped away from the adult industry to pursue some personal and business venture. Bu when she returned to adult films, there was a new, all out persona with Cherry Kiss that would result in some incredible films. She worked with male star Rocco Siffredi on a number of projects and became one of the favorites for a number of Marc Dorcel films. These projects and others would also result in many awards and nominations.

Now that Cherry is shooting some scenes in the U.S. you can look for even more exciting things to come from her. She is an extremely talented, likeable, sexy young lady with a great business sense and a sexual appetite that is hard to top. With all the awards and nominations to this point, there will be more on the way in 2020 and beyond. I am pleased to introduce you to Cherry Kiss my “Girl of the Week” here on AAN.