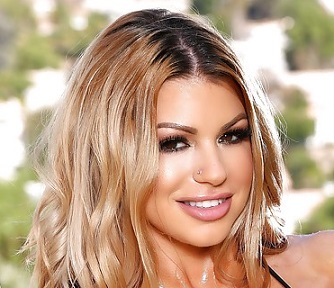 Girl of the Week – Brooklyn Chase

This week we introduce you to a striking young lady who has been on the adult scene for several years. She didn’t start her career until she was in her late twenties, but she sure has made up for lost time since.  She is an all around performer with quite a resume. Her name is Brooklyn Chase.

She was born in the beautiful city of San Diego, California on March 14, 1985. She came from a good family background. She has two other siblings and she did all her growing up and schooling in the San Diego area. She was a very shy young girl and really kept to herself pretty much.

At fifteen she lost her virginity and then at eighteen right after school was over she married her boyfriend. For a number of years after she worked mostly in retail and customer service when she decided there had to be more. She was suddenly out of a job, had bills to pay so she made the decision about doing adult.

Standing just 5’ 2” with a 32G-25-37 figure, seductive eyes, brown hair and an inviting smile, Brooklyn is most definitely an inviting presence. In addition to her films, she is also a very in demand performer on the feature dance circuit appearing in top gentleman’s clubs all across the U.S.  Needless to say this lady is the complete package.

Girl of the Week – Macy Meadows