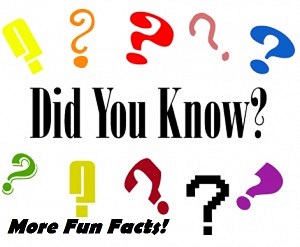 Facts That Sound False But Are Actually True

There are all kinds of wild facts, truths, falsehoods, etc. out there about millions of things. Here are a few facts that may sound false but are really the truth. Just more Jeopardy! stuff for you to store away in case you ever need it.

FACT – Prince Charles, looking for more efficient ways of fuel for his automobile found one. He had his vintage Astin-Martin reworked at it runs on……….wine!

FACT – Strawberries, blackberries and raspberries are not really berries. According to science, because they have their seeds on the outside they are not considered a berry. However, a watermelon with seeds inside is actually a berry!

FACT – So you think London, England is one of the world’s largest cities? It is not   as the city of London only has about 9,000 people. However the greater London region, of which the city is a part of, is made up of 8.1 million people.

FACT –  The state of Alaska is both the western and easternmost state in the country. How? Because of it’s proximity to the North Pole and incredible land mass which is twice the size of Texas.

FACT – Giraffes and humans have the same number of bones in their neck. Yep a giraffe neck is 6 feet long and a human’s averages 4-5 inches. But both have just  seven bones in the neck.

FACT – The 100 Day War between El Salvador and Honduras all started over a soccer game. When they played each other in 1969 for spot in the 1970 World Cup and El Salvador won, riots erupted and got so bad a full scale ware began. With more than 2,000 casualties on both sides, after four days a truce was called.

FACT – The state of Wyoming has a total population of 580,000 people. But is has a total of 1.3 million cows. Also, in the entire state there are only 2 escalators and both are in  two branches of a bank.

FACT – Irene Triplett of North Carolina is the only living person who still collects a Civil War pension. Now 89, her father served for the Army and because of his service, his wife and children were granted pensions for the rest of their lives.

FACT – The erectile dysfunction drug Viagra is also good for something else other than it’s intended use. Drop a tablet in vase with fresh flowers and it will keep the flowers fresh, upright and fresh for a week or two longer than normal.