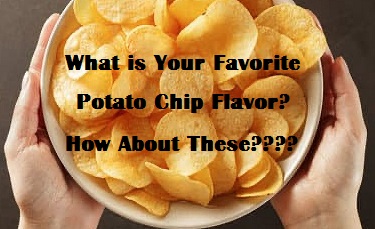 If you are like us and millions of others, that is one of your favorite snacks. But since they first came out way back in 1853, there have been a lot of changes. Other than various flavors, it was back in the 1950’s when dips for chips became popular and have been around ever since. No longer is it just plain salted potato chips. Barbecue got added, then Sour Cream and Onion and that got followed by Sour Cream and Cheddar and more flavors from the various companies, including some off the wall ones as well.

Then for a few years Lay’s held an annual “Do Us a Flavor” contest, where potato chip lovers are asked to create new flavors for a huge cash prize. In many cases some of those flavors would get featured by Lay’s for a limited time in stores all over the country. Some were quite good, Chicken and Waffles and Biscuits and  Gravy among them. I know we all have our favorite flavors and brands. When it comes to my all time favorite, it is a flavor that only the Wise Potato Chip Company has put out for years, Onion and Garlic flavor and they are greeeeeat!!

Today, thanks to the internet you can order them direct from all of the different companies in a variety of size packages. They are delivered fresh, well packed and not a bunch of crumbled, broken chips.

Here is a list of some of the different flavors here in the U.S. that have come out and been successes and failures. We also list some flavors that are favorites in other parts of the world.

Cinnamon and Sugar chips from Pringle’s in 2013

Kettle cooked Wasabi Ginger-flavored chip won the 2014 Lay’s Do Us A Flavor contest.

Szechuan Chicken flavor from Lays in 2014

Flamin’ Hot and Dill Pickle-flavored chip in 2019 from Lays

Roast Chicken flavor from Walker’s in the UK

There are plenty more flavors from the U.S. and around the world. If you want to check out some of the others go to:: https://www.msn.com/en-us/foodanddrink/foodnews/15-of-the-most-surprising-potato-chip-flavors-ever/ss-BB1euwrQ?ocid=U506DHP&li=BBnb7Kz and also check: https://www.wsbradio.com/entertainment/10-weird-potato-chip-flavors-you-forgot-about/5FIDVJVLFRAYLCJRTFGEOURPFY/