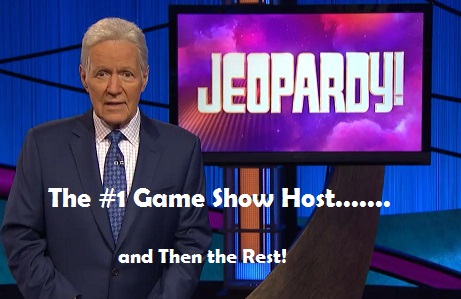 This past Sunday we lost an icon in the TV game show world, and in life, Alex Trebeck. He had been battling pancreatic cancer for almost two years and fought a gallant fight. He never once gave up his hosting duties on “Jeopardy!” even though there were times he went through the show in pain, but the audience or contestants never knew it. He swore he would beat it and at times it looked like he might. At the time of his death the shows being aired had been done about a month earlier, finishing on October 29. In these current episodes he looked very good, sounded good and one would never know what he was going through.  Mr. Trebeck became a role model for those suffering with pancreatic cancer as well as other forms of cancer. He never realized, he said, how much of an effect his presence on the show had on people. Not once did he ever use his “celebrity status” to elicit sympathy, but instead received an outpouring of love and comfort from millions of dedicated viewers of “Jeopardy!” worldwide. He said it was that showing of care and love from the e-mails, texts, cards, letters and mail he received from fans that got him through each day. Despite his “celebrity status” he was a very humble and family oriented man who lived his life to the fullest.

As for his career, his resume reads like a who’s who of game shows. He was doing a variety of shows for the Canadian Broadcasting Corporation (CBC), including a French language American Bandstand type show back in the day. He had become a fairly well known name but it was a fellow Canadian who would bring a change to Alex Trebeck’s career and life. It all began when  actor/writer/singer Alan Thicke was producing a new game show called the “Wizard of Odds”,  and wanted Trebeck to come to the states to do the show. That was in 1973 and although the show only aired for a year Alex Trebeck with his boyish looks, the moustache and personality had made an impression on the networks and game show producers.

From that time until the reboot of Jeopardy!” in 1984, Trebeck was the emcee of game shows like High Rollers, The $128,000 Question, Pitfall, Battlestars, Classic Concentration, To Tell the Truth and more. He even did a little acting for fun on shows like Cheers, Golden Girls, Baywatch and others. But it was in 1984 when game show creator, singer Merv Griffin decided to reboot his show “Jeopardy!”,which had had a previous hit run on NBC from 1964 -1975 with Art Fleming as the host. Griffin wanted to do the new version in syndication which was a new form of television income That was when everything would change. Griffin brought on Mr. Trebeck along with announcer Johnny Gilbert to host the show in syndication and the rest, as they say, is television history 37 years later as the longest running game show in TV history. Alex Trebeck was, is and will always be, one of a kind who gave all of us so very much in our lives in so many ways and on so many levels. He will be forever missed by us all.

In honor of Mr. Trebeck here are my picks on eleven of the all time classic and best game show hosts whot helped make the game show genre so very popular, especially after the quiz show scandals of the 1950’s. These are listed in no particular order.

Pat Sajak – No question he belongs on any list. He, along with sidekick Vanna White have hosted the other Merv Griffin created show “Wheel of Fortune” since 1985, taking over the show from  Chuck Woolery. A former radio deejay, Sajak has received 19 nominations for the Daytime Emmy Award for Outstanding Game Show Host, winning the award three times. Pat is now a youthful 74 and shows no signs of slowing down.

Gene Rayburn – He was another host who came from radio, hosting a long running radio show in New York City “Rayburn and Finch” on WNEW.  He did an audition for a new show being planned and was selected to host a new game show called “Match Game” in 1962. He had done other shows previously and also appeared on Broadway in “Bye Bye Birdie”. With his trademark long, skinny microphone and his comedic use of the word “blank” he hosted the show for twenty years. He passed away in 1991 at age 81.

Allen Ludden – He actually studied to be an English professor but found his way into acting and TV. He was the host of “The College Bowl”, also shows like “Win with the Stars”, “Stumpers” and a few others. His reign on all the versions of “Password” between 1961 and1975 that made him a household name. He also hosted “Super Password” until cancer forced him to leave the show. He was married to Betty White who he had met on the show. Mr. Ludden passed away from cancer in 1981 at age 63.

Bob Barker – He began his career in radio back in the late 40’s and was in Los Angeles in the 50’s doing local radio when  he was tapped to take over as the host of the popular show “Truth or Consequences”. When it moved to TV in 1956 Barker went with it and stayed until it ended in 1974.  But in 1972 he also took on a brand new TV show called “The Price is Right” and would make TV history staying with the show until 2007 when he retired at the age of 84.

Bill Cullen – Another who began in radio and would make the successful move to TV. But he also fought a battle with polio as a child that would leave him partially disabled. Still he amassed quite a career. Known as the “Dean of Game Show Hosts,” Cullen hosted more than 20 game shows during a television career that covered five decades. He was host of the music-themed “Name That Tune” aand also “Password Plus”, Bill Cullen was the first to guide the ship of “The Price Is Right”, but the physical demands proved too much, enter Bob Barker. Mr. Cullen died of lung cancer in 1990 at the age of 70.

Tom Kennedy –  A native of Louisville, Kennedy went from radio to TV in Los Angeles and hit the TV screen running in 1963 when  he did the hit game show “You Don’t Say”from 1963 -1969. Then came “Split Second”, a seven year run on ”Name That Tune”, and also taking over for Allen Ludden who had become ill on “Password Plus” and many others after that.. He also was a guest panelist on a number of shows and even did some acting. His brother Jack Narz was also a well known game show host. Tom Kennedy passed away one month ago at age 93.

Bert Convy – A former minor league baseball player for the Phillies, Convy was actually a singer and actor before becoming a game show host. He appeared in clubs and various TV shows as both an actor and singer. He would go on to host “Tattletales,” “Super Password” and “Win, Lose or Draw (which he and Burt Reynolds created). He was also a popular panelist on other game shows and was also awarded an Emmy for Outstanding Game Show Host in 1977. He died in April 1991 of brain cancer at age 57. ,

Dick Clark – “America’s oldest teenager” was known for American Bandstand and rock and roll, but he was also a Emmy winning game show host. He was the guiding force through every incarnation of the “Pyramid” series starting with the “$10,000 Pyramid” in 1973 all the way through 1988 when it had become the “$100,000 Pyramid”. Clark’s way with contestants and celebrities was very homey, fun and made the show one of the biggest views on TV. Like many game shows, Pyramid also had prime time versions and was also in syndication in the late 80’s. Dick Clark was active even after a stroke but passed away in 2012 at the age of 82.

Wink Martindale – He went from popular radio deejay to game show host  and also a recording star. In his six decade career he is best known for hosting the very popular “Tic-Tac-Dough” from 1978 to 1985. He also hosted “Gambit” from 1972 to 1976 and again in 1980-81 and the popular “High Rollers” in the late 80’s. He has a star on the Hollywood Walk of Fame and was the first game show host to be inducted into the American TV Game Show Hall of Fame. Mr. Martindale is still with us living a quite life with his wife in Californi and will turn 87 next month.

I also want to send out honorable mentions to some of the early TV game show hosts like Garry Moore, Peter Donald, Bert Parks, Dennis James, Bud Collyer, Art Fleming, Jack Barry and so many more  from the golden age of television.

I purposely stayed away from the current game show hosts like Wayne Brady, Drew Carey, Elizabeth Banks, Steve Harvey, Joel McHale, etc. who all do a great job, because I also wanted to celebrate those from the past who also gave us many hours of enjoyment in our lives during the good times and bad times. I thank them all for filling my head over the years with so many bits of trivia knowledge, laughs and surprises.

I hope you enjoyed this addition of “Art’s World” as much as I did putting it together over the past few days. Please feel free to share this with friends who enjoyed Alex Trebeck and the TV game shows. Thank you all. To see even more about the different game show host go to: www.yardbarker.com/entertainment/articles/the_25_greatest_game_show_hosts/