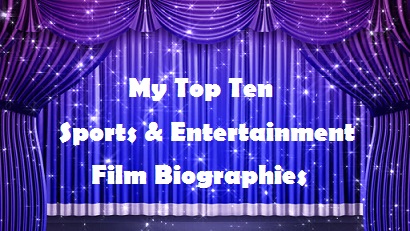 As you all know by now I am a big time sports junkie, have been in the entertainment industry in radio, concerts, management, etc. and enjoy good biographical films. With that in mind I compiled my list of my favorites in one list of ten, five in entertainment, five in sports (I could have easily made it 20) along with some comments. I hope you enjoy looking over this list and the comments I have added.

These are all listed in no particular order, so here we go!

Pride of the Yankees – Lou Gehrig – Okay, it was a bit on the corny side, but then Gehrig was somewhat of a quiet “aw shucks” kind of guy and Gary Cooper nailed the role perfectly in every way. For me, as one who has disliked the Yankees since my youth, I still think this 1942 black and white film is one of the best of the sports and baseball bios that has been done. It was also a film the introduced reverse cinematography as Gehrig was a lefty and Cooper was right handed, but thanks to this new technology it came off flawless.

Ray – Ray Charles – Jamie Foxx’s uncanny, Oscar-winning incarnation of the late Ray Charles dominates this chronicle of  pioneer’s Fifties and Sixties heyday. He gets everything right from the blind pianist’s look and shuffling gait to his vocal intonations. The movie is filled with terrific acting from, like  Kerry Washington as Charles’ wife, Bea, and Regina King’s as one of Charles’ mistresses and backup singers, Margie Hendricks of the Raelettes. This one of the best of the best.

Beyond the Sea – Bobby Darin – Yes, by now we all know that Kevin Spacey turned out to be not such a nice guy morals wise and his career tanked. However, before all that surfaced there was no question he was one of the best in Hollywood on the screen and TV (House of Cards). In this bio of Bobby Darin, Spacey didn’t go for the exact look, but more for the sound and physicality of Darin. His singing and dancing mirrored Darin perfectly making it very believable. Also giving a solid performance as wife Sandra Dee was Kate Bosworth.

42 – Jackie Robinson – This film about Jackie Robinson and his breaking the color barrier had three things going for it that made it a hit. Number one was the acting by the late Chadwick Boseman, spot on in every way. Second, Harrison Ford as Branch Rickey was uncanny in an ignored Oscar worthy role. Third, Jackie’s widow Rachel had final say on the script so that 98% of that film was totally accurate. The baseball sequences and super imposed shots of Ebbetts Field and the old parks were incredible adding more believability to the timeline.

Glenn Miller Story – Glenn Miller – Miller was the greatest band leader of the big band era and his death during WW II was felt worldwide. Jimmy Stewart stars as Miller and he is absolutely on the mark in his portrayal. The music alone makes this film great, but so is the story not only of the band and its rise to fame, but the love story between Glenn and Helen. One extra note. Harry Morgan plays Miller’s piano playing best friend Chummy McGregor in this 1946 film and would become better known years later as Col. Potter on M*A*S*H.

The Aviator – Howard Hughes – As the young Howard Hughes during his Hollywood years, before the madness set in, Leonardo DiCaprio is truly outstanding. Hughes was blessed with a brilliant mind and he was fascinated with movies and aviation blending them together with 1930 film “Hell’s Angels” which became a classic. It is an outstanding performance that beautifully explores a Hughes troubled mind. The genuine fear in his eyes when he has one of his spells is truly frightening to watch take place in this breathtaking performance. The film would go on to be nominated for 11 Oscars and win 5 along with 6 Golden Globe noms, winning 4. A great supporting cast amplifies just what a mad genius Hughes was before he went totally off the deep end.

Coal Miner’s Daughter – Loretta Lynn – Sissy Spacek received a well-deserved Best Actress Oscar for her portrayal of country queen Loretta Lynn in this straightforward approach to the singer’s story, from her impoverished beginnings in Butcher Hollow, Kentucky to her eventual climb to country super stardom. Completely believable whether portraying Lynn as a love-struck teen, harried working mother or the “Queen of Country Music,” Spacek was very impressive with her singing. Everyone from Tommy Lee Jones to Levon Helm and Beverly D’Angelo (as Patsy Cline) turn in strong performances. Having worked with Loretta back in my country music days I can attest to honesty of this great film.

Miracle – US Hockey 1980 – How can you leave off a film that portrays one of the biggest upsets not only in Olympic history, but in the history of sports? The answer is, you can’t. This film about the fantastic USA Hockey team knocking off the Russian pros for the Olympic gold medal came at the right time in our country. The film was extremely well put together with some excellent hockey action scenes taken from the actual Olympics. But the standout was Kurt Russell as USA coach Herb Brooks. His portrayal of the hard nosed coach was totally believable and took this film over the top.

Moneyball – Billy Beane – This was the film that opened the door to the world of sabermetrics. Brad Pitt stars as Oakland Athletics’ general manager Billy Beane, who upended decades of eyeball-test baseball scouting with his advanced statistical measurement of an individual player’s value to the team. It has a real, true story line, some very good on field sequences, but it is the mind of Beane that is the focus on this exceptional film. It was also a method that has since been adapted, in some form, by every ML team. Jonah Hill was exceptional as assistant GM Peter Brand. The film also was nominated for six Oscars and four Golden Globes

Brian’s Song – Brian Piccolo – This was a TV movie, but belongs on any list. While the story is based on sports it is much, much more than that and the sports part pretty much takes a back seat. Though Gayle Sayers and Brian Piccolo were fierce competitors for the same running back position on the Chicago Bears, the two men became the best of friends. That bond only grew stronger when Piccolo was diagnosed with cancer. Billy Dee Williams and James Caan are perfectly cast as Sayers and Piccolo in this classic TV movie. The realism that both actors show in some of the more dramatic hospital scenes is mind boggling. I am sure that the stock for Kleenex went way up after this aired.

There you have my personal picks for the best film bios of sports and entertainment figures in this edition of “Art’s World”. As I said, I could have easily made this list twenty, so maybe we’ll do another ten at some point. How many of these were your favorites, how many have you actually seen? I really would love your feedback and comments.