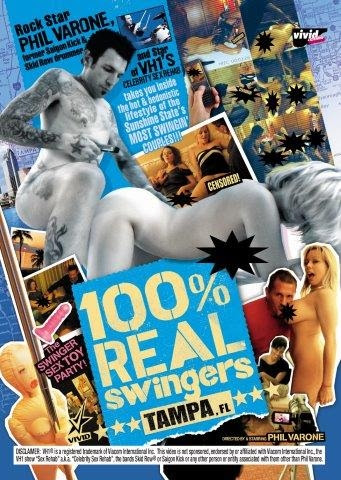 LOS ANGELES—(December 16, 2013)–Tampa has a history of hurricanes but the heat wave that hits the city in Phil Varone’s newest movie, 100% Real Swingers: Tampa from Vivid Entertainment will surely be remembered more than any weather phenomenon. The movie will be available online, on Vivid TV and in stores nationwide starting December 16th.

In this latest installment in his adult reality movie featuring authentic swingers and not actors, Varone, the multi-talented rocker, director, actor, author and veteran swinger of over 20 years, takes viewers to a swinging Tampa sex toy party beyond anyone’s wildest imagination.

“When I was asked to pick a city to shoot 100% Real Swingers, Tampa was my first choice,” says Varone. “It’s not the weather that makes Tampa hot, it’s the swingers! This is the first time I filmed a real swinger sex toy party and I wanted the viewers to see first-hand how much fun we have.”

As a rock drummer, Varone was best known for playing with Saigon Kick and Skid Row. Since he entered adult entertainment, his reputation has expanded to include producing the best-selling swinging series for Vivid. Only Varone’s movies feature genuine local swingers.

About Vivid: Founded in 1984, Vivid Entertainment is the leading source for quality erotic film entertainment and has created wide brand-name awareness through its films, innovative marketing and licensing programs. Vivid-branded products range from condoms and apparel to vodka, to name a few. Vivid licensed its powerful brand for gentlemen’s clubs and has opened locations in Charlotte, Miami, Los Angeles and New York, with commitments in other major cities. Vivid’s movies are seen online, in DVD, VOD and now on its own network, Vivid TV, seen in over 60 million homes nationwide as well as in Europe, Canada and Latin America. Vivid’s 24/7 radio channel, Vivid Radio, airs on SiriusXM Channel 102.  The Vivid-Celeb imprint made “celebrity sex tape” a household word and helped launch the Kardashian phenomenon in the process. Vivid is the most awarded studio in the history of the industry and its high-budget productions remain the most acclaimed couples-friendly adult films ever produced. Mainstream television audiences got to know the company through two seven-part series on Showtime, as well as through publications ranging from The New York Times to Forbes and on TV networks from CNBC to ABC. Vivid founder/co-chairman Steven Hirsch recently received the first AVN Visionary Award as a leader who “has propelled innovation, and taken his company and the business to whole new heights.” For more on Vivid visittwitter.com/VividCorp or facebook.com/Vivid.

Girl of the Week - Vanna Bardot