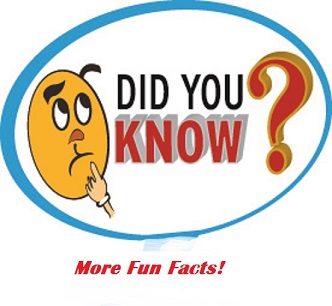 We never seem to get enough when kit comes to  unknown facts, surprising facts, fun facts and trivia. There is the long running TV Show Jeopardy! There other g game shows that use trivia, there are trivia contests in bars and nightclubs, online and in the form of board games of various kinds. We just never seem to get enough, so here are a few more for you to add to your wealth of knowledge.

Benjamin Franklin, one of our greatest speakers, writers, inventors and politicians only had 2 years of formal education. All the rest he picked up by reading all kinds of books, essays, articles and put that knowledge to incredible use.

The Stanley Cup has more misspellings on it than any other trophy. Team names, player names, executives names all have some misspellings. HOF goalie Jacques Plante won the cup 5 times and each of those five times his name is spelled differently. Guess the NHL doesn’t use spell check.

Numbers and letters. If you were to write out every number (one, two, three, etc.) you would not use the letter “B” until you write one billion.  Now don’t try it to see if is true, trust us on this.

B en & Jerry’s ice cream is world renowned and a big favorite since they began in the 70’s. But did you know that originally they were going to start a bagel business but the equipment was too expensive. So they took a $5 course about ice cream making at Penn State and the rest, as they say, is history.

Bras and World War 1, now that’s a combo. But the fact is back then women wore corsets. The government asked them to switch to the new accessory called the brassiere. The reason was the amount of metal that was used in corsets was needed for the war effort. So WW 1 actually helped popularize the bra.

Nuts! In particular pistachio nuts. In a 2011 study they were found to help men with erectile dysfunction.  17 men were given 100 grams of pistachio nuts every day for 3 weeks and the result proved to be successful in better blood flow and erections. Pistachios, no prescription needed!

When you think of roses you naturally think of flower families. However, apples, pears, peaches, plums, cherries and almonds are all part of the rose family, Rosaceae which encompasses over 2,500 species.

Sports Illustrated and Presidents? Yep, the long time sports magazine’s cover has featured the greats of sports on its cover. But also four U.S. Presidents. Appearing on the cover have been JFK, Gerald Ford, Bill Clinton and Ronald Reagan  twice.

Hummingbirds are very pretty to look at and they are pretty special. Not only can these birds beat their wings 80 times per second, but they can also fly backwards. Scientists filmed this phenomenon and they did it with ease.

Just a few more fun facts for you to add to your wealth of knowledge of “shit we should know”! If you want to learn even more than go to: https://www.msn.com/en-us/lifestyle/did-you-know/100-amazing-facts-for-people-who-cant-get-enough-amazing-facts/ss-AAARLyT?li=BBnb7Kz&ocid=U506DHP#image=62 which is where we found these gems.