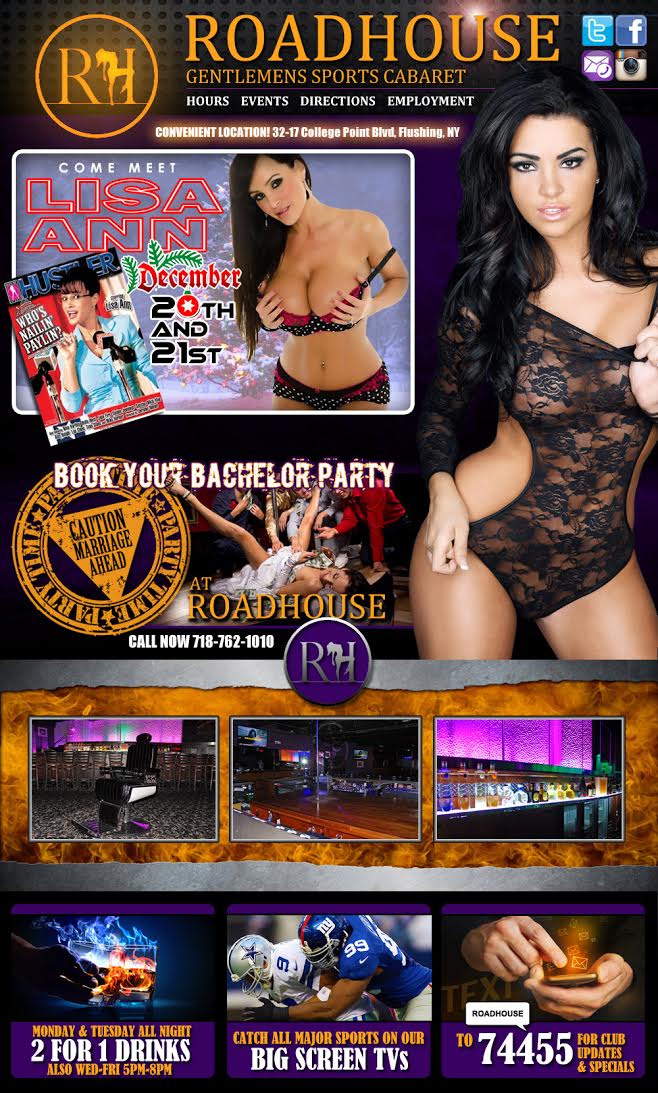 “Nothing beats coming home for the holidays,” says Lisa Ann. “This is the perfect way to end the tour of 2013 – at home, in New York, with the best fans in the whole world!”

The Roadhouse is located at 32-17 College Point Blvd, Flushing, NY 11354. For more information about Lisa Ann’s appearance, call the club directly at 718-762-1010 or visit its site at www.roadhousenyc.com. The Roadhouse can also be followed on Twitter at www.Twitter.com/roadhousenyc and on Facebook at https://www.facebook.com/RoadhouseNYC.

Fans of well-known sports enthusiast Lisa Ann and those also love fantasy football can enjoy her every week on her hot, new Sirius / XM show, Lisa Ann Does Fantasy. The show can be heard every Monday night at 10pm EST on the Fantasy Channel, at Channel 87 on XM and Channel 210 on Sirius. The gorgeous and incredibly fit brunette’s sexy voice can be also heard in the record breaking billion-dollar video game Grand Theft Auto V.

Lisa Ann had her own show on Sirius/XM called, “Stripper Town,” and has been a frequent guest on Sirius/XM’s other channels, including Shade 45, Sirius Out Q and Sports Fantasy. She is regularly interviewed on shows such as Howard Stern, GQ, Cinemax, MTV, TMZ, and VH1.  Lisa Ann is also a Fleshlight Girl, immortalized as the ultimate men’s sexy toy.