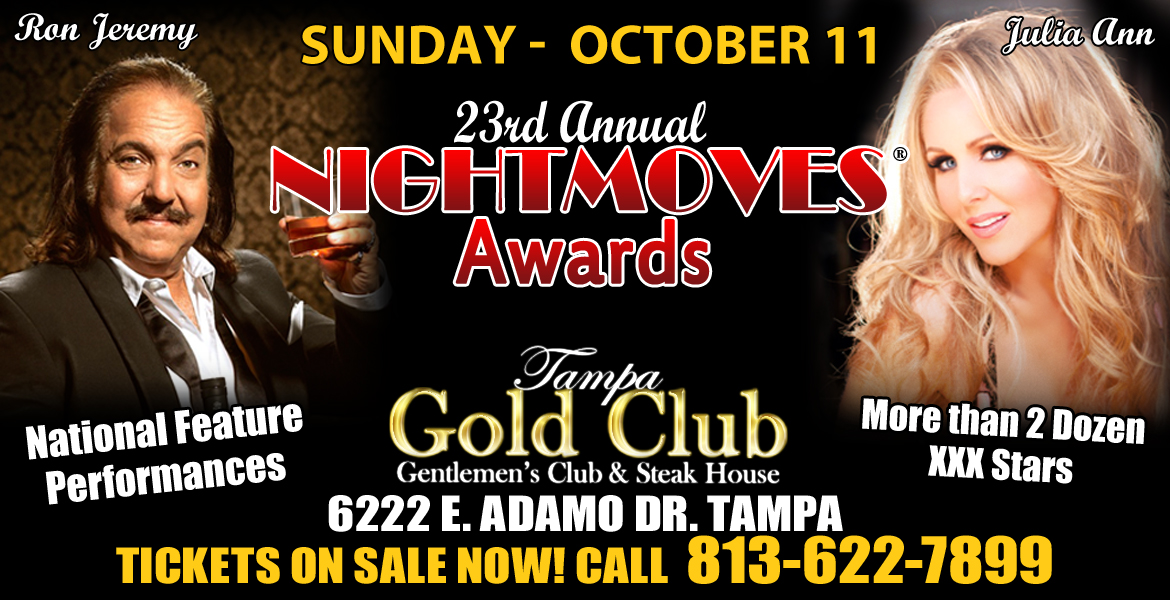 TAMPA, FL (OCTOBER 5, 2014) – Adult superstars Ron Jeremy and Julia Ann, along with perennial emcee favorite Tony Batman, will be on hand to host the 23rd Annual NightMoves® Awards, held in Tampa, Florida Sunday, October 11. Jeremy has hosted every single show since 1992 and will continue that tradition on the NightMoves® stage this year; Batman will be returning as Master of Ceremonies for his 10th consecutive year.

“This year’s show will be amazing!” says Tracy Allen, Editor of NightMoves® Magazine and Co-Producer of the NightMoves® Awards. “We have a great group of stars coming to Tampa Bay. We are really looking forward to having Julia Ann co-host with Ron Jeremy – those are two huge names in the adult industry! We broke all voting records this year, and our Twitter numbers were just as impressive. We look forward to seeing everyone at the Awards!”

The entertainment won’t be limited to female performers; the evening will also feature one of the top male revues in the nation, Buns & Bowties Male Dance Group, as well as rap star / adult performer Flynt Dominick. The Awards show will close the evening with the return of the $1000 balloon drop – every single balloon dropped will contain some sort of dollar reward, in different denominations, for attendees to grab.

The public is also invited to attend the NightMoves® Awards After Party, held at I & II Emperors Gentlemen’s Club, 5718 Adamo Dr, Tampa, FL. Fans will be able to celebrate alongside this year’s winners from midnight till 2am. For more information, call the club directly at 813.630.0707.

NightMoves® Awards, started in 1993, is the third oldest and continuously running adult awards show in the United States, trailing only the AVN Awards and the XRCO Awards. The NightMoves® Awards were the first to allow fans to select the winners, making it the original Fan Based Awards, as well as the first awards show to allow online voting. In addition to the Fan Awards, the show presents Editor’s Choice awards based on reviews of DVDs in which the nominated performer has appeared.

The NightMoves® Awards are more than a one-night awards show; it is a fun-filled, exciting, ultra-busy weekend that includes “Star Caravan” events at local nightclubs and multiple radio appearances. In addition, fans will be able to meet and interact with performers at the NightMoves® Fan Fest, where stars sign autographs and take photos. For a full schedule of appearances and events, visit https://nightmovesonline.com/nightmoves-awards-show/nightmoves-awards-weekend-schedule/.