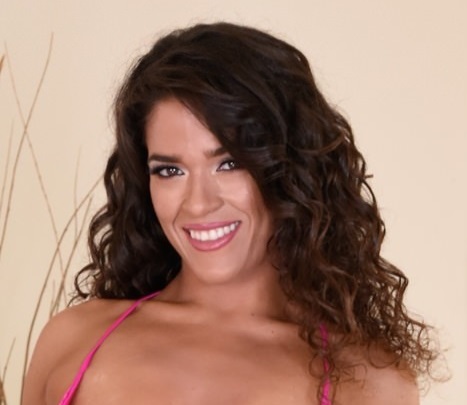 She came into this world on December 5, 1994 in Denver Colorado. Victoria is part Latin and in school she was the sports jock type as a member of the varsity softball team all four years. But she also sang, danced and was also a very accomplished actress. By her junior year she went from geek to a hot, sexy teen with a voracious sex appetite.

According to Victoria it was the guitar player in her band who gave her a little push when she expressed a desire about trying the adult industry. It turns out the guitar player was a former adult performer. So she began to search various agencies to see what would be best if she was going to get into this business. She went to her first AVN Expo in early 2018 and that was the start.

She hooked up with Nexxxt Level Talent and since then Victoria has been on the move. With her voracious sexual appetite and her creative side, this sexy brunette wants to try everything and experience everything sexually. So far she has done quite well appearing in a variety of genres. In addition to her hunger for sex, she also gets to show off her talented acting chops as well.

Among the companies she has worked for are Evil Angel, Girlfriends Films, Wicked Pictures, Elegant Angel, Devils Films and more. In addition she has done web scenes for companies such as Teamskeet, Girlsway, CherryPimps and more . Check Victoria out in her two recent releases, “Black and Latina” for Dark X and “Women Seeking Women 165” for Girlfriends Films.

With her background in music, dance, acting and love for sex, the future looks very bright for this sexy young lady. She has the look, the talent, the desire and I truly believe this will be her breakout year. As we mentioned she is a Best New Starlet nominee and you can vote for her at: https://nightmovesonline.com/vote-now/ I am very pleased to present Victoria Voxxx as my “Girl of the Week’ here on AAN

Girl of the Week – Alice Visby

Girl of the Week – Scarlit Scandal