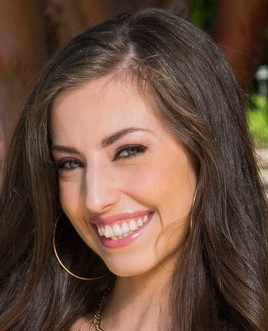 This week we introduce you to a petite young lady from Indiana who is proof that big surprises do come in little packages. Since she entered the industry she has been making plenty of headway with her sizzling scenes and appearances on cam sites as well as in some dazzling films. This year of 2022 could be the big break out year for this talented female so keep an eye out for her. Now we want you to meet Spencer Bradley.

Spencer was born on September 8, 1994 in South Bend, Indiana. She did all her schooling there and is an only child. She was pretty popular in high school and got her cosmetology license before she graduated. After graduating, she attended Ball State University. She finished college and has her bachelor’s degree. So, needless to say, this  petite young lady is also one very smart and intelligent woman as well as a natural beauty.

From dancing on stage in clubs and then selling clips online she jumped right in and shot her first hardcore scene with JMac and also began being represented by Jonathan Morgan’s NeXXXt Level Talent. She said with everyone there and the very professional setting, doing that first scene was very comfortable and natural for her with no problems. Everything clicked and it was obvious that Spencer was a natural fit for the industry.

So now her career was underway along with a name change. When she was working on stage as a stripper she went under the name Anastasia. This sexy pixie said that she wanted to have a more unisex name and so after going over some ideas they came up with Spencer. Needless to say the name change has worked well and her work in films and her growing fan base was on the increase through 2019 and into 2020 with everything very promising.

Among the projects she worked on she also had the pleasure of working with established stars like Lauren Phillips, Prince Yashua, Charles Dera and others. From 2019 in to 2020 everything was going great, her fan base was growing the films were happening, then along came COVID and everything slowed to a crawl for the entire industry. Like everyone else who was new, it affected her rise in the industry, but Spencer was determined to push ahead.

The industry is back to normal and this sexy, talented young lady with the big, bright smile is ready to take the ball and run with it. We honestly believe that 2022 has become a huge breakout year for her. She has the looks, the talent, the personality and  a ton of potential to be a major star in adult films now and in the future, so keep an eye on this young lady. I am very pleased to have Spencer Bradley as my “Girl of the Week’ here on AAN.

Girl of the Week – Alyx Star