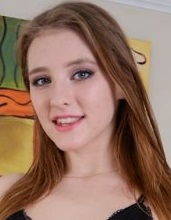 This week’s girl come from the Midwest area of the country and has been in the business since 2018. She has made a steady rise up the ladder and has an interesting background. While she is climbing up the ladder of success in adult and gaining a great fan base, sh e also has her eyes on completing her college education. Her name is Melody Marks.

Guess what? This young lady is a leap year baby. She was born in Ohio on February 29, 2000, so she only has a birthday every four years! (Well, not really!). She come from a large family with 10 siblings and step siblings. Until she was fourteen Melody was raised by her grandmother.

Like many newbies, Melody’s first scenes were web scenes in very late 2018 But fear not, the films were about to come her way and bring her new fans. The one thing doing all those early web scenes showed was Melody’s sweet look, telling blue eyes, long hair and all natural body were a huge hit with her growing fan base.

When it came to films one of her early ones in 2019 was Bubble Butt Babysitters #3 for Lethal Hardcore, for whom she would do a few others. In addition there were films for Evil Angel, Girlfriends Films, Erotica X, Digital Sin, AMK Empire, PornPros and others. There have also been a lot of hot, new web scenes as well.

While she has only done a combined 70 scenes thus far, she is someone you need to check out. So here are a couple of suggestions for you. There is “In the Room: Family Affairs” for Digital Sin  “Lesbian Seductions #69” for Girlfriends Films, and the newly released “Internal Love 6” for Erotica X. Do yourself a favor and give them a look.

With just over a year in the industry and less than a year shooting films, this young lady has a bright future. She is fun to watch, has a winning way and smile, not to mention some great talents.  The awards and nominations are not that far away for her either. I am very pleased to introduce you to Melody Marks my “Girl of the Week” here on AAN.