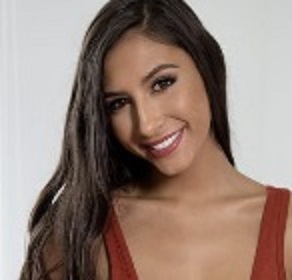 We first introduced you to this young lady back in December 2018. At that time she was brand new to the industry. But in 2019 her career really took off. This very sexy girl has captivated directors, co stars and fans with her beauty and her incredible talent both as a performer and actress. Once again  here is Gianna Dior.

She was born on May 12, 1997 in the small town of Andalusia, Alabama. It is also where she would grow up and go to school. She had a pretty normal up bringing with a good family, but because both her parents worked for the military she was raised pretty strict. Gianna is of Italian and Native American heritage which accounts for her very exotic looks.

After graduating high school the 5’ 5” brunette was quite busy working in Sushi restaurant and also taking a job as a receptionist for an optician and also worked in a Sushi restaurant. Gianna attended Auburn University where she majored in Psychology. But she was well aware that her future was elsewhere and in May of 2018 she entered into the adult industry.

Being free spirited, and open minded sexually and feeling she could do it Gianna took time off from work and her classes and made the trip. Well that week off turned into a permanent one as Gianna found her calling. With that start, she knew where her future was. So she packed up everything, loaded up her car and made the drive out to L.A. from Miami.

Thanks to a chat with adult star Keiran Lee, he put her in touch with the respected agent Mark Spiegler. After arriving in L.A. and meeting with him, she signed on as a “Spiegler Girl’ and has been on a nonstop excursion ever since. She has done films for BangBros, Evil Angel, Jules Jordan, Bellasa, Adult Time, Dark X, Naughty America and other plus some terrific web scenes.

In addition to her new film career, Gianna was also named the Penthouse “Pet of the Month” in September.  If you want to see what all the buzz is about with this young lady, check out her fantastic performances in the award nominated films, “Adelaide” for MissaX and “Perspective” for Adult Time,  along with her recent “Hot and Bothered” for Bellesa Films. She is simply outstanding.

Topping it all off, she was the winner of the 2020 AVN Best New Starlet award. There is no question in my mind that 2020 is going to be an even bigger year for this beauty. She has the look, body and talent, both as an actress and a performer, to be one of the industry’s top stars. So keep an eye out for this Alabama brunette. I am very pleased to re-introduce Gianna Dior to you as my “Girl of the Week” here on AAN.